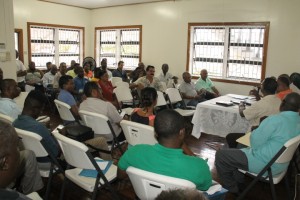 The Guyana Gold and Diamond Miners Association (GGDMA) on Thursday rejected calls by several civil society organisations for the delisting of mining as an essential service, saying that the industry accounts for a huge chunk of foreign exchange earnings and a fair amount of economic growth.

“Miners have a right to ply their trade even during this time. Mining contributes consistently for a number of years over 10 percent of Guyana’s GDP (Gross Domestic Product),” GGDMA President, Andron Alphonso told a Private Sector Commission (PSC) briefing.

He cautioned that if mining was taken off the list of essential services, Guyana’s much needed foreign exchange earnings would decline and that could cause widespread economic problems for the country. “We are also essential because we contribute consistently to over 55 percent of the foreign currency earnings  without which there will be catastrophic consequences to cost of living and other issues that would come as a consequence of dollar being destabilised and imports becoming much more expensive,” Alphonso added.

The GGDMA President backed the position of the Guyana Geology and Mines Commission’s Commissioner, Newell Dennison that “mining has to continue.”

Alphonso said his association was working with the Pan American Health Organisation (PAHO) develop a number of protocols and guidelines for small and medium scale miners on how they should operate in the interior as well as miners passing through or near Indigenous Indian communities.

The COVID-19 virus, he acknowledged,  could spread to mining communities. The Public Health Ministry said there are reported cases in  Puruni in Region 7 (Cuyuni-Mazaruni).

The Guyana Human Rights Association (GHRA) and several other civil society organisations have restated their call for strong leadership to enforce strict rules against the movement of miners through Indigenous Indian communities to minimise the spread of the disease from the coastland to the interior.  “This implies that measures such as restrictions on mining and lock-down on all vehicles travelling inland from either Linden or Lethem.  In this regard, the GHRA adds its voice to the calls for mining, which is neither essential nor a service, to be removed from the list of Essential Services,” that human rights organisation said.

The GHRA noted that in the past the Indigenous Indian communities have been severely infected by malaria and Human Immunodeficiency Virus (HIV) which causes Acquired Immune Deficiency Syndrome (AIDS).