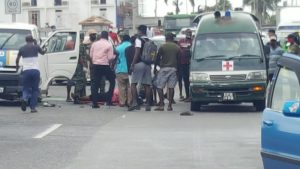 A Guyana Defence Force ambulance and soldiers responding to the accident.

One person was killed and three others were injured  in a Thursday mid-morning collision between a mini-bus and another vehicle (RAV4) on the East Coast Lilliendal Southern Carriageway.

The driver of the RAV4 who spoke with News Talk Radio says the mini-bus pulled into his lane to stop for a passenger which caused the collision.

He was also taken to the hospital for injuries he sustained.

Patrick Edwards driver of the mini-bus says he was approaching a corner on the corner lane to stop for a passenger when he felt an impact to the side of the bus which caused it to topple.

Edwards says two of his passengers were injured as a result.

Edwards was taken into police custody as police continued their investigation.