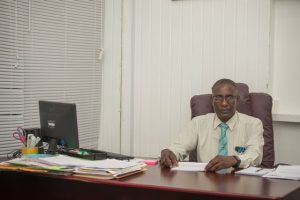 Doctors at the Georgetown Public Hospital Corporation (GPHC) are now receiving COVID-19 laboratory results in a timely manner, rather than having to wait 48 hours, according to the hospital’s Director of Medical and Professional Services, Dr Fawcett Jeffrey.

“We have a medium now that is assisting us in getting the results in a more timely manner,” he told News-Talk Radio Guyana 103.1 FM/Demerara Waves Online News. “The voice of the medical fraternity has been heard and we have not had any major problem getting results,” he added.

Unlike the 48-hour wait, Dr Jeffrey said doctors were since April 5 receiving results either on the same day or most times the next day based on when the specimens are sent to the National Reference Laboratory. He noted that in the United States (US) results are available 48 hours after the samples are tested but that was most likely due to the large volume of tests that have to be conducted.

He recalled being the first doctor who had raised his voice against the prolonged delay in GPHC doctors receiving the COVID-19 lab results. “I am the very first person who initiated the complaint to get the results in a timely manner,” he said, adding that he had raised concerns internally at GPHC and they were eventually passed on to the relevant authority.

Well-placed sources on Tuesday told Demerara Waves Online News that the Guyana Medical Council was so concerned that doctors were receiving the results 48 hours after the National Reference Laboratory had conducted the tests that it penned a letter to Public Health Minister, Volda Lawrence on April 6. The concern seemed to centre on claims that the results first had to be sent to the Health Minister, more so who is not a medical doctor, before they were released to the doctors who were treating COVID-19 cases.

Dr Jeffrey said early results would make a greater difference in treating patients who show few or no symptoms compared to someone who is gravely ill and has to be managed based on his or her condition.

The GPHC Director of Medical and Professional Services urged Guyanese to be a bit patient because it is important that the laboratory be given time to ensure whether or not the person has contracted the coronavirus, COVID-19.

The Guyana Medical Council reportedly told Ms Lawrence that the delay in providing results to doctors was also putting health workers at risk, preventing timely care of patients and quickly tracing people with whom they have been in contact with so that they can be isolated and quarantined.

Previous: US ready to work with GECOM, international observers on recount -Pompeo
Next: GRA announces more tax relief measures due to COVID-19