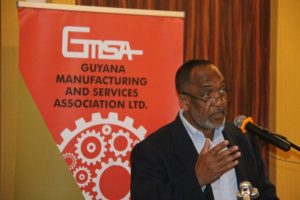 Guyana’s environmental watchdog’s capacity-building efforts to monitor its quickly developing oil and gas sector are being stymied by this South American nation government’s inability, due to its caretaker status stemming from the no-confidence motion, to approve funding the agency.

The Environmental Protection Agency’s (EPA) Executive Director, Dr Vincent Adams, addressing a Guyana Manufacturers and Services Association (GMSA) business luncheon on Wednesday indicated that, after more than one year’s in-depth and detailed preparation of its 2020 budget, his agency is being forced to adopt the one-twelfth spending principle until after a new government is sworn in after the March 2, 2020 general elections.

The EPA boss calculates that the budget might be available by June, 2020.

With the no-confidence motion having been validly passed in December, 2018, and the Caribbean Court of Justice (CCJ) ruling that the David Granger-led coalition administration is in an interim or caretaker mode until after elections are held, the government could not table a new budget or ink new deals. Parliament has since been dissolved to make way for the holding of elections.

Tracing his tenure so far at the EPA, Dr Adams noted that his agency would have to spend some of the more than GYD$140 million that had been collected from the renewal of 500 permits that had expired for about 15 years. He said some of that money was used to purchase seven vehicles within the past years for officers to use for monitoring and enforcing EPA rules and regulations. “We are being tough now. All this eye-pass has stopped and we’ll never return to that kind of an environment. It is a two-way respect,” he said.

He expressed concern that the agency’s funding challenge has come at a time when the EPA plans to double its staff and hire engineers, including retirees who would mentor staff, in order to rise to the demands of a burgeoning oil and gas sector.

The agency’s plans for this year include the establishment of a 36-member oil and gas monitoring unit, and further decentralisation of EPA operations in all ten administrative regions. “To me the government must always have better qualified people than the other side or else you lose your leverage and bargaining power. They are not going to respect you; they are going to want to run roughshod over you and you are going to feel so diminished that you are going to be afraid to ask a question even when you’re in doubt,” he said.

Another priority plan for the EPA is the conduct of baseline studies on oil concessions that have been granted.

Dr Adams disagreed that there were no standards, guides and regulations in Guyana, saying that they exist in other parts of the world and are being adapted locally. “Standards are there that we are adopting. In time, we will develop our own regulations but it doesn’t mean that it will be any different to what currently exists,” he added.