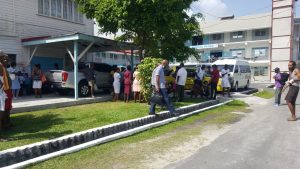 A number of the psychiatric patients after the fire.

A fire erupted at the psychiatric ward of the Georgetown Public Hospital Corporation (GPHC) Wednesday morning but all of the 48 patients were evacuated without injuries, a senior fire officer at the scene said.

Fire Officer for operations Gregory Wickham said a probe has begun to determine the cause of the fire.

The blaze began in a ward on the lower flat.

Wickham said severe damage was averted by the staff in the ward who used fire extinguishers to contain the blaze.

Demerara Waves Online News/News-Talk Radio’s Sean Embrack was on the scene and observed a number of the patients outside the building in the company of health care workers.

An eyewitness reported that during the fire a number of the patients was seen looking through windows and laughing.

He said there was no structural damage to the building and the patients would be returned there Wednesday afternoon.