Granger takes dig at PPP over closure of sugar estates 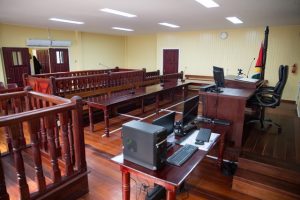 One of the courtrooms at the Diamond-Grove Magistrates Court.

President David Granger on Wednesday took a sharp dig at the People’s Progressive Party (PPP) over the closure of sugar estates and laying off of thousands of workers.

He was addressing the formal opening ceremony of the Diamond-Grove Magistrates Court, East Bank Demerara, which he said has been built to ease the caseload on the Providence Magistrates Court and serve the more than 35,000-strong large community of Diamond, formerly a sugarcane estate that was one of a number closed by the then PPP administration.

“Nobody is going to advocate for the reopening of Diamond,” Granger said in clear reference to election campaign promises by the PPP that it would reopen all the sugar estates that have been closed by the incumbent coalition administration.

Still coming under sharp criticism for his administration’s closure of the Wales, Enmore-East Demerara, Rose Hall-Canje and Skeldon Estates and laying off of more than 5,200 workers, Granger noted that during the 23 years of the PPP’s rule from 1992 to 2015, 5,340 employees of the state-owned Guyana Sugar Corporation (GuySuCo) were removed from the payroll.

“Diamond-Grove, two decades ago, was primarily canefields. The downsizing of the sugar industry did not commence in 2016,” he said.

The President recalled that Diamond estate, alone, severed 500 employees when it was closed in 2010 and GAWU took GuySuCo to court to secure benefits for those employees.

Granger highlighted that the end of sugar production at Diamond resulted in the release of 4,000 hectares of land for other purposes.

“A thriving human community has emerged out of the rubble and stubble of the cane-fields of Diamond estate. Diamond-Grove now has its own banks, churches, commercial enterprises, hospital, insurance companies, mandirs, masjids, police station, pure-water supply system, restaurants, schools and supermarkets. The community, deservedly, now has its own magistrates court,” he said.

The Diamond-Grove court was built at a cost of GYD$143 million.