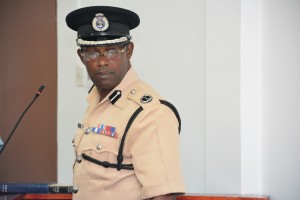 Assistant Police Commissioner, Clifton Hicken was Wednesday seconded to the Ministry of the Presidency’s Department of Citizenship, but he brushed off concerns that he has effectively been removed from the administration of the Guyana Police Force.

Asked if he was given any reason for his secondment, Hicken said “that is nothing new. Police is [sic] always attached from time to time.” Hicken deflected questions about whether he regarded the secondment as a means of moving out of the force’s administration.

“No, why must I think like that? Come on. Wherever I am posted is God’s will. I don’t think like that. I have never been a negative person. Nobody gave me reasons to think like that either. As far as I am concerned, I am seeing it as a promotion for me, the mere fact I am entrusted to go to the Office of the Presidency,” Hicken told News-Talk Radio Guyana 103.1 FM/Demerara Waves Online News.

Hicken said he has been seconded to the Ministry of the Presidency until June, 2020.

No one has been promoted to Assistant Police Commissioner for 2020.

Deputy Commissioner Lyndon Alves, who had been under investigation, has since been ordered to proceed on leave and into eventual retirement. At least one other high-ranking police officer is said to be the subject of another probe.

Hicken had been the divisional commander at the time of the Linden unrest in 2013 against a planned hike in electricity rates. Three residents were shot dead by police.