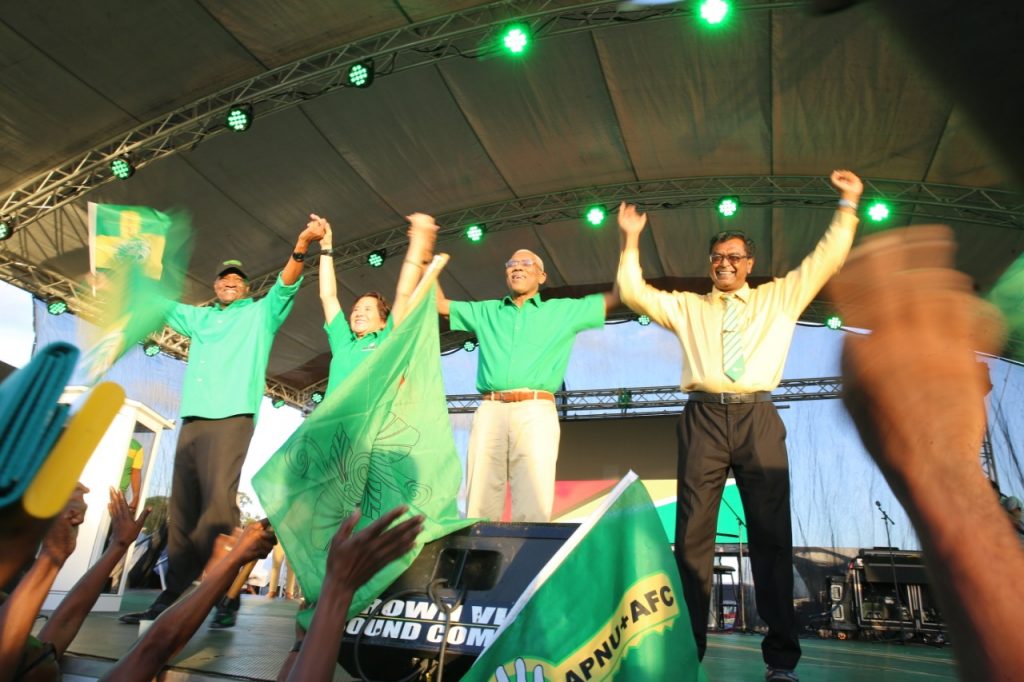 The incumbent A Partnership for National Unity+Alliance For Change (APNU+AFC) on Friday did not announce its prime ministerial candidate, although the only indication was AFC Leader Khemraj Ramjattan was the second senior politician addressing the thousands of attendees at the launch of the coalition’s 2020 general elections.

The two MCs for the event stayed clear on several occasions of saying that Ramjattan was the prime ministerial candidate, instead only referring to him as AFC Leader and Minister of Public Security.

For his part, Ramjattan also did not state that he would be Granger’s running mate.

It is yet to be seen whether the coalition would provide any clarity on or before January 10, 2020 – Nomination Day – for the March 2 general elections.

APNU+AFC Chairman and presidential candidate, David Granger stayed clear of referring to Ramjattan, Moses Nagamootoo or anyone else in his address.

But, Ramjattan punctuated his address with ringing endorsements of Granger, the most notable being, that the coalition is “led by a man who is undoubtedly fit and proper – David Granger. Always calm but strong, always honest, measured and intellectual. Government in Guyana needs brains not brauns,” Ramjattan said.

Ramjattan also called Granger “properly qualified and certified and who led the tremendous progress so far” in contrast to an “arrogant, feral” PPP led by Irfaan Ali “whose qualifications are questionable and who seem not to know where his certificates will come from.”

All of the banners seen at D’urban Park, the venue where the coalition’s campaign was launched, only featured huge Granger images unlike 2015 when his and Nagamootoo’s had adorned most campaign paraphernalia.

The AFC Leader, at the outset of his speech, thanked Nagamootoo for his service and said there would be a role for him in the future. “Moses, you continue to serve us well and I want to say ‘thank you’ and I look forward for your continued leadership,” he said to rousing applause.

The privately-owned Stabroek News has reported that the revised political agreement, the Cummingsburg Accord, signed by Granger and Ramjattan on December 24, 2019, provides for Granger to assign the AFC four ministries of his choice and the party will get to decide and make recommendations on who will head those.

In the revised accord, the AFC’s parliamentary seat allocation has been reduced from 40 percent to 30 percent.

One of the coalition’s MCs, meanwhile, indicated that the coalition mobilised supporters from across the country to attend the campaign launch in Georgetown. He said 287 buses transported persons from the East Coast Demerara, and 1,500 persons were shuttled in from Linden. Others he said came from East and West Berbice, and West Demerara-Essequibo Islands.