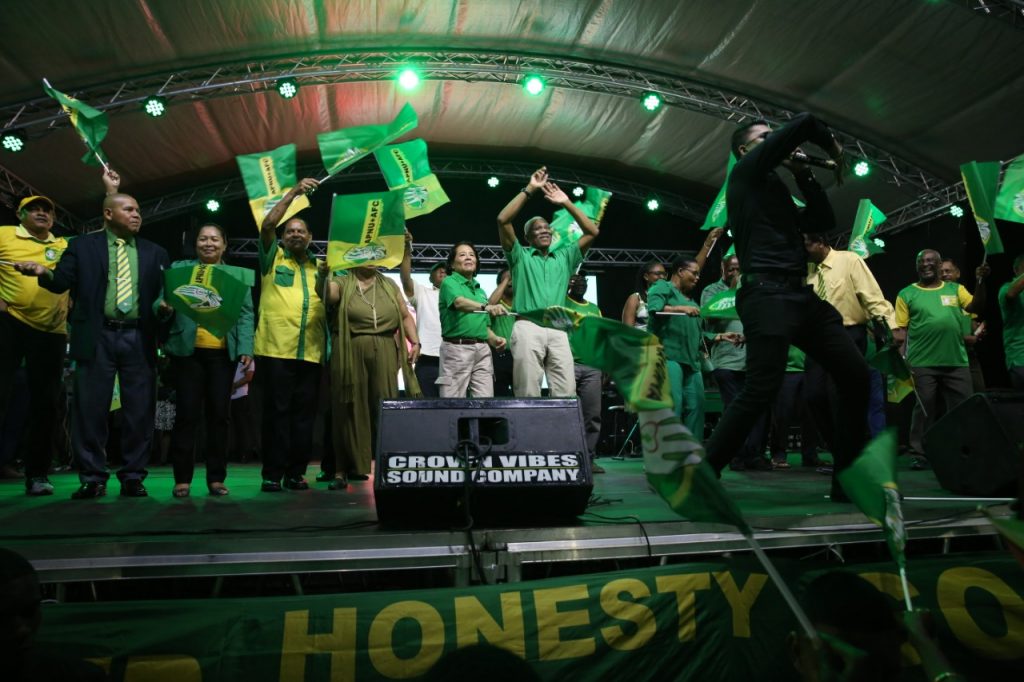 President David Granger and other top coalition supporters and executive members on stage at D’urban Park during the launch of the 2020 general elections campaign,

A Partnership for National Unity+Alliance For Change (APNU+AFC) presidential candidate, David Granger on Friday night disclosed that constitutional reform would seek to alter the no-confidence motion provisions that the opposition People’s Progressive Party (PPP) invoked one year ago.

“We are going to reform the constitution so that that nonsense they tried for us in the last twelve months doesn’t happen again,” he told thousands of supporters who were mobilised from across the country to attend the event at D’urban Park, Georgetown.

Granger again lamented about government backbencher, Charrandass Persaud on December 21, 2018 who had voted for a PPP-sponsored no-confidence motion securing its passage by 33-32 and subsequent validation by the Caribbean Court of Justice (CCJ) in July, 2019.

Granger Friday night again sought to fend off opposition claims that his administration had been occupying government illegally because general elections ought to have been held by March 21, 2019 or the latest by September, 2019 after the CCJ had ruled that the motion had been validly passed. “We are a constitutional government and everything that we have done for the last twelve months was in accord with the law and in accordance with the constitution but we will continue the work of reforming the constitution,” he said.

The Granger administration had said it could not call general elections much earlier because the Guyana Elections Commission (GECOM first had to declare its readiness to conduct the polls.

In his New Year’s message, President Granger unveiled the first snippet of his constitutional reform agenda, saying he wanted to make changes that would be aimed at “preventing constitutional gridlock.”

The President has been saddled with acting Chief Justice, Roxane George-Wiltshire and acting Chancellor Yonette Cummings because Opposition Leader, Bharrat Jagdeo has refused to greenlight the Guyanese leader’s nominee, Justice Kenneth Benjamin, for the post of Chancellor.

Vote for coalition based on its record 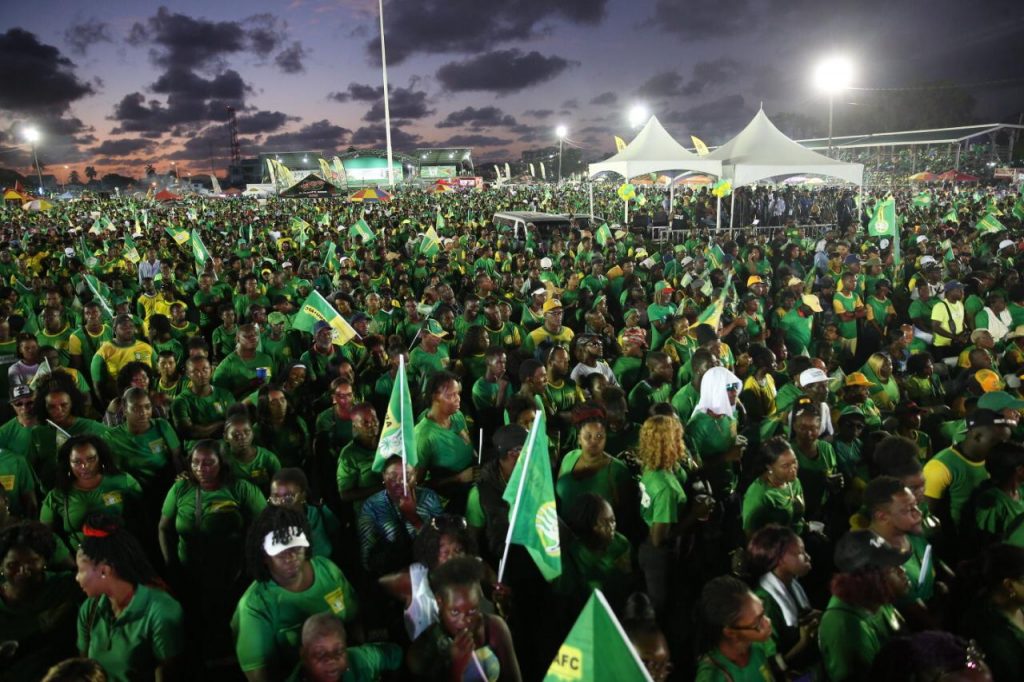 A section of the thousands of people who attended the launch of APNU+AFC’s 2020 general elections campaign.

The APNU+AFC presidential candidate appealed to Guyanese to give his coalition another chance to continue improvements in electricity, housing, access to education, public infrastructure in new towns. “We ask you for five more years to complete what we have started. They tried to cut us down but they cannot stop us,” he said again in apparent reference to the no-confidence motion.

He credited his administration with ending graft and corruption and said his coalition would be the best party to manage Guyana’s oil wealth expected this year at US$300 million annually from an initial production of 120,000 barrels daily.

“We are your best guarantee to ensure that oil money is well spent,” he said. The President highlighted that since his administration won the 2015 general elections there has been an end to death squads. “Your country is in good hands with APNU+AFC. Trust me, trust the coalition,” he begged of the party faithful.

Clearly targeting the significantly large number of young voters who make up the electorate, Granger said his government has taken steps to prepare youths to become employed. “We make sure that every young person leaving school can get a job. They bruk up the National Service but we built the Youth Corps, we built the Hinterland Youth Service so that all young people can get a second chance to get a job and be self-employed,” he said.

AFC Leader, Khemraj Ramjattan, who also addressed the campaign launch, promised young people that “we will create a mechanism to ensure that our young people participate and have a meaningful input in the formulation and implementation of policies at the highest levels” similar to local government decision-making through two elections in four years.

Specifically on the use of oil revenues, he told the youths that “we will have a resplendent revenue stream to implement these policies; the oil and gas revenue stream.” “Young people constitute the largest portion of our small population and continue to face challenges in advancing their ideas and dreams. The next coalition government will do far more to encourage, engage and empower our youth by implementing policies that will address the challenges faced by our young people,” said Ramjattan.

Ramjattan contended that the APNU+AFC coalition’s record of achievements in four years has “out performed” the PPP’s 23 years of “blunders”. Achievements, he cited, included a 77 percent increase in the minimum wage over the last four years, GYD$3.2 billion in new and improved health facilities, GYD$5.4 billion on new and improved schools and colleges, increased old age pensions to GYD$20,500; reduced corporate tax from 40 percent to 25 percent, exempted small businesses that earn less than GYD$15 million annually from Value Added Tax, established a small business fund, free WiFI and free laptops and computers to 375 schools, and spent GYD$43 billion on expanding roads and bridges since 2016.

Ramjattan, who is also Minister of Public Security, said government has clamped down on criminals. “We have turned the screws on criminals by applying intelligence gathering and surveillance techniques, in addition to increasing community policing groups all over the country,” he added.

“Don’t stop the progress,” he rallied the supporters.

Previous: Podcast: Highlights of launch of A Partnership for National Unity+ Alliance For Change 2020 election campaign
Next: No APNU+AFC prime ministerial candidate announced at campaign launch