by By Max Parrott of QNS.com 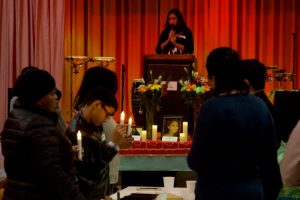 Donna Dojoy’s family participates in a candle lighting in her name.

(Reproduced from QNS.com) The murder of a 27-year-old Guyanese woman committed by her husband in early November pushed Ozone Park’s Indo-Caribbean community to reflect on the recurring incidents of gender-based violence in their community.

On Sunday, Dec. 15, a group dedicated to empowering Indo-Caribbean women and addressing gender-based violence organized a vigil to honor the life of Donna “Rehanna” Dojoy and facilitate a conversation on how to address spousal violence and other forms of gender inequity in their community.

That group, the Jahajee Sisters, was formed in 2007 soon after the murders of two young Indo-Caribbean women that fit a pattern of gender-based violence, which the group defines as crimes that are rooted in gender inequality.

A group of over 50 gathered to listen series of musical performances and eulogies for Dojoy that took place in front of an alter for her and five other female victims that the group has memorialized since its inception.

One of these victims, Natasha Ramen, a Guyanese woman from Hollis, was stabbed to death by her alleged rapist before she could testify against him in court.

“We felt at that time like the silence around her death was devastating and deafening. It felt like none of our community leaders at the time, who were mostly men, were speaking up for us,” said co-founder Shivana Jorawar.

Dojoy, a “joyful, kind and caring child” who loved to karaoke Bollywood songs at the bar where she worked, was stabbed by her husband, 33-year-old Dineshwar Budhidat, whose body was found hanging from a tree later the same night after texting his cousin that he intended to kill himself.

Dojoy had an order of protection against her husband, after he was arrested Aug. 21 for slapping and strangling her in their apartment.

“She grew up to be a beautiful lady — was educated at the University of Guyana. She came here for a better life. She was seeking an opportunity to be able to better help her family back home,” said her aunt Sweta Dojoy.

After the ceremony, organizers split the group into men, women and gender-nonconforming groups in order to have a discussion on what gives rise to gender-based violence in their communities and how they can counteract it.

In the men’s circle, the conversation moved from moments where intervention is necessary to forms of masculinity that are commonly reinforced in Guyanese culture.

“I don’t think there’s many spaces for men to get together and talk about something this sensitive,” said Rohan Narine. “I realized being in spaces like this–how it’s so important.”

Together the groups put together a series of recommendations and projects based on the conversations. Guides on how to identify toxic behavior, sensitivity trainings, advice for religious leaders and parents to address gender-based violence will all be taken into consideration as the Jahajee Sisters create their program for the next fiscal year, according to Jorawar.

After the Dojoy family sat through dedication and candle lighting for their dead loved one in tears, her aunt praised the work of the Jahajee Sisters.

“I’m grateful and hopefully it will help other young people to avoid this kind of tragedy and families to endure this kind of suffering,” said Sweta Dojoy.