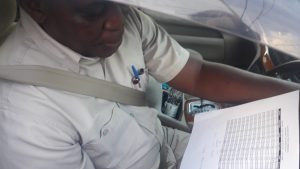 Opposition Elections Commissioner, Robeson Benn briefing the media with a copy of the statistics of duplicate registrants.

The Guyana Elections Commission (GECOM) on Tuesday agreed, by a split decision, to conduct house-to-house verification of the names of more than 20,000 new registrants.

“We just had a decision where there will be a verification exercise by the Guyana Elections Commission and stakeholders in respect of 20,556 names of persons who have been suggested to be placed on the list of electors for the electors,” opposition People’s Progressive Party Civic-nominated Elections Commissioner, Robeson Benn told reporters.

He said the seven-member Elections Commission was split on the decision and it was GECOM Chairman, Claudette Singh who voted for the verification exercise to be conducted. Benn said he expected GECOM to begin the verification process on Wednesday and is expected to last five days.

Pro-governing coalition elections commissioner, Vincent Alexander minutes later expressed disappointment at the decision, saying the verification process would be “useless” because those duplicates could have been investigated and hearings conducted. “There is no need for anything else to be done, as far as I am concerned. It got to the point where we have done an internal side-by-side comparison of the information… Field exercise has nothing to do with duplicates,” Alexander said. “It’s a decision GECOM could have made but I wouldn’t say it is illegal; it is useless,” he added.

Alexander flagged the possibility of a slippage in the elections schedule towards the March 2, 2020 general elections, but declined to commit himself definitively about whether that schedule would be affected.

But PPP-aligned elections commissioner, Sase Gunraj was confident that the schedule would not be affected including the fact that three of the five days are working days.

The GECOM Secretariat or its Public Relations Officer did not say anything to the media on Tuesday on this important decision. A news conference was scheduled for Wednesday.

Benn said of the 20,389 persons, 16,369 were not found, an “astonishing” 4,020 were duplicates on the preliminary list of electors “in spite of all the work which has been done” through the house-to-house registration in July and August, 2019.

He explained the exercise would include field verification, public advertisements, and participation of “stakeholders”, a seeming reference to political parties.

“Our hope is that the GECOM staffers will pursue this exercise with the type of diligence that it requires to provide satisfaction to the electorate, to the public and all those concerned who have an interest in our having free, fair, transparent and peaceful elections,” he said.

Benn said he felt vindicated by GECOM’S decision on Tuesday.