Tullow may decide within one year fate of Guyana oil discoveries 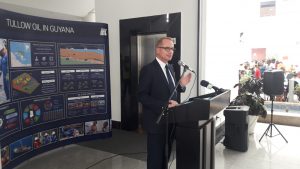 The United Kingdom-headquartered oil company, Tullow Oil, may take another year before it actually decides what it will do with its two oil discoveries offshore Guyana.

A senior company official informs News-Talk Radio Guyana 103.1 FM/Demerara Waves Online News that it will cost a lot more money to extract the oil commercially. The industry source explains that’s because of the heavy sulphur content of the oil that has been found offshore Guyana. The source says usually such heavy oil deposits are located in shallow well. However, the cost to commercially extract the heavy sulphur oil will be higher because the deposits that Tullow found are located in deep water. 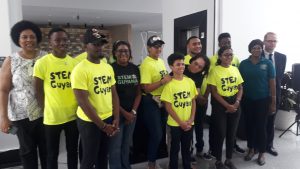 Addressing a Science Technology Engineering and Mathematics (STEM) exhibition at the Arthur Chung Conference Centre, Tullow Guyana Country Manager, Joachim Vogt remarked that his company’s oil discoveries offshore Guyana require a lot more work. “For Tullow, it was an important year in Guyana. We drilled two wells which are discoveries with some challenges ahead as the high carbons we found in the Orinduik Block come with some specifications which entail a lot of work, home work to design a potential production outcome,” he said.

He also cautions Guyanese against using ExxonMobil’s discoveries as a benchmark for expecting results of other exploratory drilling. “With Tullow’s discoveries in Guyana this year, you see the usual incredible success rate of discoveries made by ExxonMobil don’t necessarily apply to any location in the Guyana offshore. It should be understood as a ‘wake-up call’ (that) finding oil in Guyana, like elsewhere in the world, is not an easy task and no one should think that the default outcome is a given,” he said.

Tullow has already said that crude from two wells — Jethro-1 and Joe-1 — in Guyana was found to be heavy, with a high sulfur content.

Tullow sponsored the STEM exhibition was held on Sunday at the Arthur Chung Conference Centre.

Hundreds of children from across Guyana displayed their skills in designing, programming and making robots to solve a number of challenges including security, waste management, and oil-spill clean-ups.

Previous: Guyana without Ambassador to Venezuela
Next: Foreign Ministry wary of Venezuela’s possible arm-twisting in G-77