Guyana without Ambassador to Venezuela 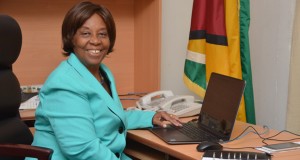 Foreign Secretary at the Ministry of Foreign Affairs, Carl Greenidge on Friday confirmed that several of Guyana’s Ambassadors and High Commissioners, including the key post of Venezuela, have been sent home.

Mr. Greenidge says Cheryl Miles will be serving as Guyana’s Ambassador to Venezuela until December 31, 2019 after which she and others would be let go from the Foreign Ministry’s employ.

“If you mean whether her contract has also been terminated, the answer is ‘yes, it has been terminated’ so she has been instructed to wrap up by the end of December,” he told a news briefing at Congress Place, the headquarters of his People’s National Congress Reform (PNCR) political party. Miles is a career diplomat who had previously served as Guyana’s Ambassador to Caracas and then Director-General of the Foreign Affairs Ministry.

Guyana and Venezuela have had a decades-long border controversy which is now before the International Court of Justice.

Foreign Ministry sources say Guyana is unlikely to be without an Ambassador in Caracas for several months because Guyana first has to submit a name to the Venezuelan government — as is the case for the other capitals — for formal approval and then called for presentation of credentials to the Head of State. It is only after the formal accreditation process can a Head of Mission represent his or her country with the host government.

Guyana’s Ambassador to Cuba, Halim Majeed, a politically-appointed Head of Mission, has not been recalled. He had played a major role as a liaison for President David Granger’s cancer treatment and care in Havana.

Mr. Greenidge says most likely they will not be returning to work with the Ministry of Foreign Affairs in Georgetown. “Some of the Ambassadors or all of those Ambassadors who would have received letters are likely to be not returning to the Ministry, simply because they will no longer be members of staff of the ministry. Some of them have contracts, they work on the basis of contracts but I don’t think any of them could be engaged other than on contracts so unless they are offered something by the ministry, they can be expected to find other opportunities, find other jobs or what have you,” he said.

President David Granger has said those Heads of Missions will be replaced with career diplomats in keeping with his commitment to professionalise the foreign service. Mr. Granger says he had planned to do this before, within three years of his administration, but that decision had faced a setback by last year’s no-confidence motion.

Previous: Oil traders head to Guyana for face-to-face contract bidding
Next: Tullow may decide within one year fate of Guyana oil discoveries