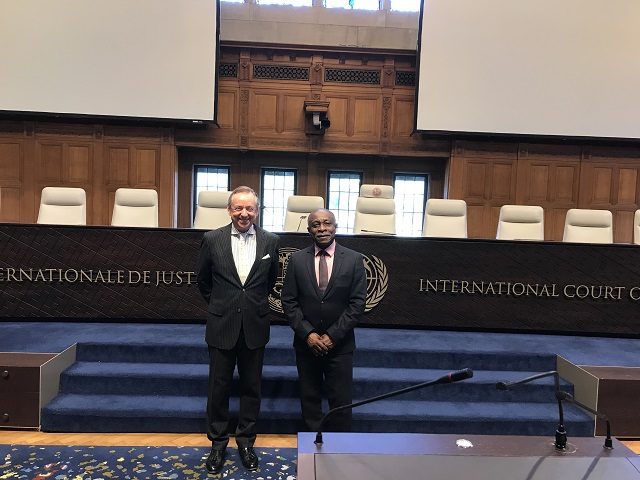 Then Foreign Affairs Minister Carl Greenidge, who is Guyana’s Agent in the court proceedings, delivered the application to the ICJ Registrar, Philippe Couvreur.

Guyana is seeking a judgement from the International Court of Justice (ICJ) on the validity of the Guyana-Venezuela boundary agreement, a move that could leverage Guyana to go to the United Nations (UN) Security Council if Caracas refuses to abide by that decision, Foreign Secretary Carl Greenidge said Saturday night.

“We are not after an advisory opinion. It is a judgement that the Court has been called on to make,” he said in an address to the Guyana Press Association’s (GPA) Annual Awards.

He made it clear that Guyana was not merely seeking an advisory opinion from the ICJ, otherwise known as the World Court. “It is important if that court pronounces in favour of Guyana but even more important would be if the court gives a judgement, as opposed to an advisory opinion, in favour of Guyana because failure of a party to honour a judgement may bring action by the Security Council,” he said.

Venezuela has not recognised the ICJ’s jurisdiction in the controversy, but instead has been demanding that the two neighbouring South American countries settle the issue bilaterally through the UN Secretary-General’s Good Officer mediation process. In that regard, Greenidge cited Article 36.1 of the Statute of the Court which provides that the ICJ has jurisdiction “on all matters specially stipulated in treaties and conventions that were in force on the date of the institution of the proceedings.”

Guyana commenced proceedings before the court on March 29, 2018. Greenidge added that the Geneva Agreement between Guyana and Venezuela provides for the UN Secretary-General to submit the controversy to any forum including the ICJ.

Weary of that process going no where for 50 years, Guyana two years ago successfully convinced the UN Chief to ask the ICJ to determine whether the 1899 Arbitral Tribunal Award had fully and finally settled the land border between Guyana and Venezuela.

Venezuela’s navy had in recent years chased out seismic research ships that had been gathering data for American-headquartered oil companies, Anadarko and ExxonMobil, at offshore oil concessions that have been granted by Guyana.