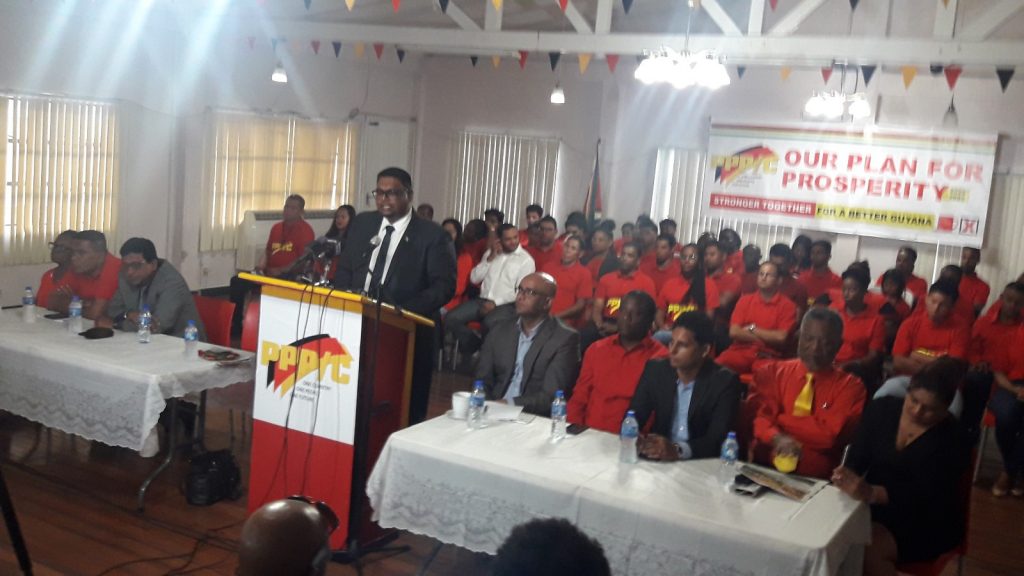 PPP Presidential candidate, Irfan Ali speaking at a press mini-launch of its manifesto for the 2020 general elections.

Presidential candidate for the People’s Progressive Party Civic (PPPC), Irfaan Ali on Friday appealed to non-traditional supporters to give him and his party a hearing and eventually cast their ballots for the party that last ruled Guyana for 23 unbroken years.

In clear reference to Afro-Guyanese – that segment of the country’s population that has largely supported the People’s National Congress Reform (PNCR)-led governing coalition – Ally made an impassioned plea to them. He even offered them the opportunity to clarify any concerns they might have about the PPP’s policies and programmes that it promises to implement from 2020 to 2025.

Ali sought to assure detractors that the PPP would not discriminate against them and instead his party is a “platform for all Guyanese” to improve their lives through a national strategy. “After the March 2nd, the People’s Progressive Party Civic government will and must govern in the interest of every single Guyanese. Whether you supported us or not, we want you to understand and be comfortable that this is a party that will hold dear your interest in a sacred manner,” he said.

While the PPP has historically drawn the bulk of its support from among Indo-Guyanese and to some extent Amerindians, the party on Friday appeared to have made a special effort to showcase a racially diverse group of persons at the head table and just beyond. It seemed that organisers also sought to ensure that those present in the glare of the media were relatively young.

A number of the older politicians, except for Gail Teixeira and Samuel Hinds, literally took a backseat at the launch of what the PPP described as an “appetizer” manifesto ahead of the full formal release of a “more technical, detailed” document in January, 2020. Those present but stood back from the cameras included Neend ‘Neil’ Kumar and Dr. Bheri Ramsarran. Former President, Donald Ramotar and former Home Affairs Minister Clement Rohee were not seen at the event, and Jagdeo said a number of those absent were in the field campaigning.

Dr. Frank Anthony, who had vied for the presidential candidacy, was seen on the PPPC’s Facebook page campaigning in the interior.

Meanwhile, PPP General Secretary Bharrat Jagdeo, confident that his party would win the March 2, 2020 general elections, promised to include the opposition in key decision-making on the oil sector. “This is crucial if we are to safeguard Guyanese because the government and opposition have to have the same interest which is protecting our national patrimony and we intend to work, as far as possible when we are in government, to ensure that the opposition views are part of the national position and that even they help to implement that national policy,” he said.

Jagdeo said civil society would have a crucial role in monitoring to ensure the oil revenues are not squandered.

Other “expanded” roles, he said, for civil society would include combatting school violence, alcohol and drug abuse.