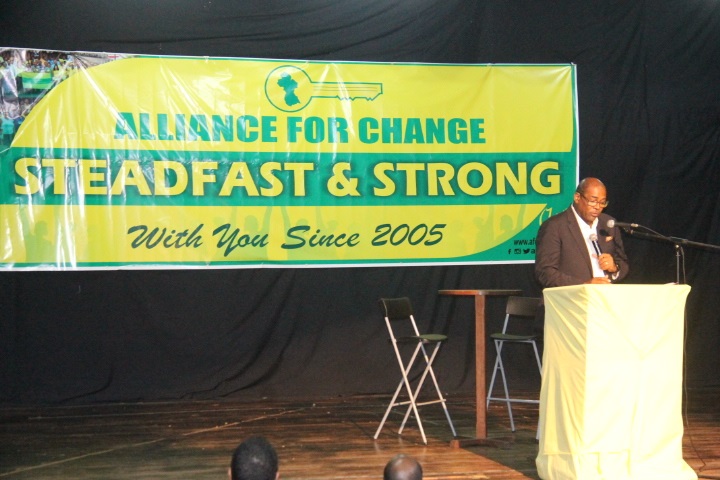 Attorney-at-Law, Nigel Hughes delivering his presentation on the topic “public forum on “The Collision of Law and Politics in Guyana’s Oil and Gas era”.

Oil industry lawyer, Nigel Hughes is warning that political interpretations of the Caribbean Court of Justice’s (CCJ) judgements on the no-confidence motion are sending bad signals to investors.

“We are now at the advent in the unfolding oil and gas era in which the interpretations of orders of court on matters of political importance are likely to be subject to different interpretations depending on the political consequences of those decisions,” Mr. Hughes told an Alliance For Change (AFC)-organised event at the Theatre Guild.

Mr. Hughes says the CCJ judgements on the no-confidence motion were interpreted by lawyers to suit their political views – either elections have to be held by a particular date or after the Guyana Elections Commission (GECOM) announces that it is ready.

However, he stopped short of directly naming former Attorney General and Minister of Legal Affairs, Anil Nandlall who had criticised the CCJ judges for not issuing orders for holding elections by specific dates.

He cautioned that such a posture could have serious consequences for investor confidence and the cost of doing business. “We will be treading on new and perhaps dangerous ground where our interpretation of the law is governed by our politics which, with all our jurists following suit,” he said.

The Attorney-at-Law, whose law firm of Hughes, Fields and Stoby recently opened operations in Houston, Texas, says this comes at a time when Guyana has not passed any new laws or regulations for the oil sector. “In a world where the conduct of the business of oil and gas is transacted, the unpredictability of the interpretation of what the order of court says and which is subject to your political position questions the reliability of your legal system,” says Hughes.

He says this risks investors insisting on contracts that avoid the settlement of disputes in Guyana’s Courts or local arbitration. Instead, they will resort to the Convention on the International Centre for Settlement of Investment Disputes which overrides local laws in signatory States and is final. 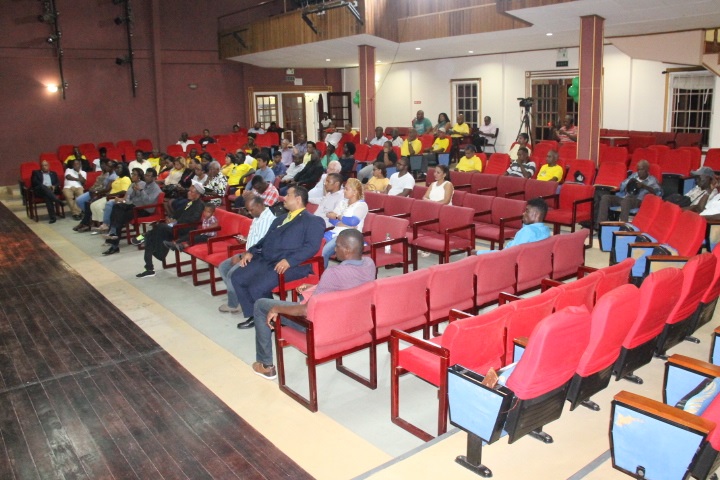 Participants at the Alliance For Change-organised public forum on “The Collision of Law and Politics in Guyana’s Oil and Gas era”.

“We don’t appreciate the impact of that. You can pass whatever laws you want. If you go to international arbitration and the determination is made on the consequences of domestic legislation, the decision of the arbitrators overrides that and once we conduct ourselves the way we have been conducting ourselves in the interpretation of our laws, we will continue to provide reasons why people will not want to rely on our domestic courts,” Mr. Hughes, a United Kingdom-trained lawyer, says.

It was Mr. Hughes who had at first stated that the absolute majority of Guyana’s 65-seat National Assembly was 34 instead of 33 after the Prime Minister, Moses Nagamootoo had virtually conceded that government had been defeated by a no-confidence motion on December 21, 2018 by a vote of 33 to 32 after a government backbencher had voted with the opposition.

The government and a private citizen had filed several court cases challenging the validity of the no-confidence motion on the basis of what had constituted an absolute majority, and whether the vote by then government parliamentarian Charrandass Persaud had been validly cast because he is the holder of dual (Canadian-Guyanese) citizenship.

Eventually, the CCJ had ruled that the absolute majority in Guyana’s National Assembly is 33 and upheld rulings in the Guyana High Court and Court of Appeal that although Persaud is a dual citizen, his vote was constitutionally valid.