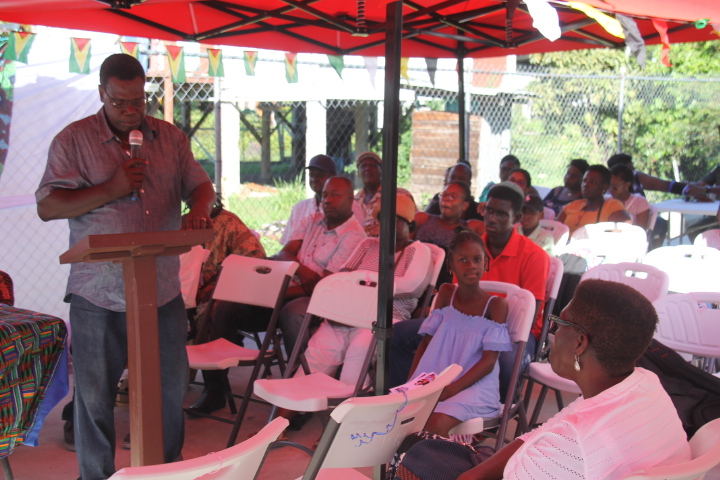 Buxton community activist, Deon Abrams speaking at the Economic Development and Health Seminar that was organized by the Buxton-Friendship Museum, Archives and Culture Centre and the Young Visionaries.

Efforts are continuing to revive agriculture in Buxton, with the clearance of at least 180 acres of land aback the village and the improvement of drainage, officials said Sunday.

An update on the project was provided at the first Economic Development and Health Seminar that was organized by the Buxton-Friendship Museum, Archives and Culture Centre and the Young Visionaries.

Village leader, Deon Abrams says almost 50 farmers have already taken advantage of the opportunity and have been producing crops. Asked why so few persons have taken up the opportunity to get into agriculture, he said some people prefer to be employed by government.

“One of the things is the distance you got to go and also we have to win people back to the idea that farming is something; it creates great possibilities. We have a lot of land at the back there…It simply means that if you create opportunities for people, they are going to take it. We just can’t discount or discredit people, saying that they don’t want to work or work isn’t there,” said Mr. Abrams, a well-known local government and community activist and educator.

Participants of the forum heard that Demerara Distillers Limited will be willing to purchase large quantities of passion fruit from Buxton farmers, and the Institute of Private Enterprise Development (IPED) can offer financing.

He said one of the reasons that few people have been farming on the land which was cleared through a project being funded by the Caribbean Development Bank (CDB) and managed by the Ministry of Agriculture is that people are more content with being employed by the government. “Agriculture has become no longer a part of the psyche of our people. We are more focused on working with the government…but we got to make agriculture again a viable thing in the community,” Abrams told the event.

At the same time, Mr. Abrams says youths in the village have been taking up job opportunities on farms. “A lot of the young people, who people said were limers and they were not interested in anything. Go down at the back there and you will see them at the back there.”

Mr. Abrams says lands that have been allocated for farming and have not been used will be re-possessed as a number of the allottees had been under the impression that the land was for housing development.

The project includes the clearance and ploughing of land and improvement of drainage in the villages of Ithaca, Beterverwagting, Triumph, and Mocha.

The farmers are receiving support from the Ministry of Agriculture, National Agricultural Research and Extension Institute, New Guyana Marketing Corporation and the University of Guyana’s Faculty of Agriculture.