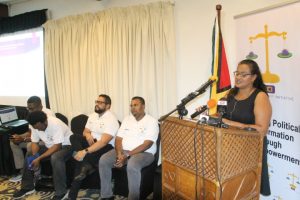 His position came one day after the newest political party, Citizenship Initiative (CI), was launched with promises to involve ordinary Guyanese in coming up with a plan of action that will include campaign financing, constitutional reform, anti-corruption, non-discrimination, high-tech education, health, and infrastructure.

Referring specifically to CI, Best said that party merely latched on to a few PNCR core principles and instead made it “prime time and prime activities for themselves.” “They haven’t come with anything new. Absolutely nothing new came from CI if you look at it carefully.”

He said CI has “no track record” unlike the PNCR , a mass-based party with 62 years of political experience that helped build the nation state including major infrastructure. “Some of the emerging parties are small parties; might be middle class to upper class parties and we don’t believe that that would be a combat-divider. We don’t see them as a major threat,” he said.

Already, three other political parties – A New and United Guyana, Liberty and Justice Party, and Change Guyana – have been formed to contest the elections.

Against the background of APNU+AFC having won the 2015 general elections by less than 5,000 votes, Best does not believe that CI or any of the other small political parties will split the coalition’s votes. “Essentially, it is a set of young persons, who are interested in the development of Guyana; I must say that, but it’s no different at all from the PNCR. That’s why we don’t believe that it’s a combat divider, it’s a splitter of votes,” he said.

The governing coalition has 33 seats and the opposition People’s Progressive Party (PPP) has 32 in the 65-seat National Assembly.

The ruling one-seat majority coalition APNU/AFC government had promised sweeping constitutional reforms on the campaign trail in 2015. Despite persistent questions, Best did not indicate any solid effort by the David Granger-led administration to reach out to the opposition to get constitutional reform off the ground.