Liberty and Justice Party leader, Lenox Shuman to give up Canadian citizenship

The leader of the newly-formed Liberty and Justice Party, Lenox Shuman, Saturday evening announced he would be giving up his Canadian citizenship.

“Let me be clear. I am committed to making a difference in Guyana. As a parliamentarian, who swears to uphold the constitution of Guyana, my first act cannot be to break the law. It is with this that I have a firm commitment and obviously principle that I will be giving up my Canadian citizenship status,” he told a well-attended launch of the Liberty and Justice Party at the Georgetown Club, Camp Street, Georgetown.

Shuman said he would soon make another attempt to discuss relinquishing his Canadian citizenship with Canada’s High Commissioner to Guyana, Lilian Chatterjee.

He said his decision was motivated by the need to abide by Guyana’s laws and constitution, but at the same time “I want to make this abundantly clear- love Canada”. “Canada has given me so much that I can never ever repay and the Diaspora has so much to offer that we can never repay,” he added.

“I am not leaving Canada because of anger, hate or anything of the sort. I am taking this position because I do believe that what I have learnt in one of the best countries in the world can benefit my homeland and it is what is required by the laws of Guyana,” he said. 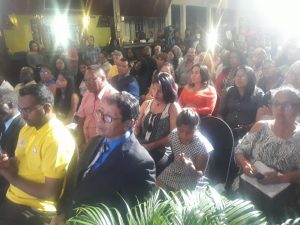 The former Vice Chairman of the National Toshaos Council and former Toshao of St Cuthbert’s Mission also told reporters after the JLP’s launch that he had been a Canadian citizen for more than 20 years.

Asked whether he had planned to return to Canada, Shuman remarked that “those plans have been dealt with”. His wife and children were not seen at the launch.

He noted that the People’s Progressive Party and the People’s National Congress Reform would be nothing without the Diaspora and steps should be taken to ensure overseas-based Guyana “are given that opportunity to serve Guyana”.

He acknowledged that Canada, “a true democracy”, despite its “ills”, has an independent justice system. “They are impartial and completely separate from the legislative branch of government, unlike Guyana where the judiciary tends to be a bit more sympathetic to the government of the day,” he said.

The LJP Leader called on overseas-based Guyanese to help their homeland to achieve all of its goals in a timely manner. At the same time, he cautioned them against returning “to be part of an elite that looks down on the people who for generations have stayed here but you are coming home to be part of our motherland’s solutions and successes.”

Shuman’s decision comes at a time when the constitutionality of Guyanese parliamentarians holding dual citizenship is being challenged in the High Court after former government lawmaker and Canadian citizen Charrandas Persaud voted for an opposition-sponsored no-confidence motion.