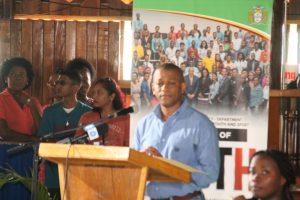 The Guyana government ruled out selling subsidised crude oil to a privately-owned oil refinery that investors plan to build in Linden, according to officials of the Ministry of the Presidency’s Department of Energy on Saturday.

“Anyone, who wishes to open a refinery can do so but they will not receive subsidised oil from the Department. That’s the crunch,” the Head of the Department, Dr Mark Bynoe said in response to GuyEnergy’s Chief Executive Officer, Dr. Turhane Doerga’s position that he was awaiting word from the government on buying 17 percent of Guyana’s oil to refine at a facility to be constructed in Linden.

He said oil would be sold to refineries at market prices.

Oil and Gas Adviser at the Department of Energy, Matthew Wilks added that globally “there is too much refining capacity in the world” and so it is cheaper to buy or lease capacity overseas, refine the products and re-import them. Wilks, who has worked in numerous oil and gas producing nations and companies, said governments do not pay a percentage of oil refining costs. 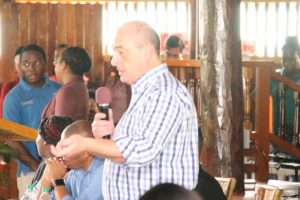 “Government doesn’t subsidise private businesses. That’s not the purpose of the government. The government has to maximise the revenue for the State to go into State expenditure and, equally, I don’t think people in this room would probably feel happy if we end up subsidising private entities,” Wilks told a capacity audience at the Umana Yana in Kingston, Georgetown.

Wilks, however, said if Guyana finds oil close to shore or on shore the only method of developing the oil would by pipeline. “Then, a refinery starts to become more pragmatic and potentially cost-effective. Now, that’s not the case now but it may be in the future so I wouldn’t say it’s an absolute ‘no-no’ but in terms of deepwater oil, bringing oil to shore to refine in Guyana is probably cost-ineffective and uneconomic,” he said.

GuyEnergy says it is building a modular oil refinery at a cost of US$100,000 to process 30,000 barrels per day for local and northern Brazilian markets.

A Guyana government-commissioned study more than one year ago had found that the establishment of a refinery to process 150,000 to 200,000 barrels per day here could cost about US$5 billion.

Guyana is expected to begin commercial oil production late this year or early 2020, raking in an anticipated initial annual revenue of US$300 million.