Police looking overseas for information on Roger Khan, as Granger, Jagdeo weigh in on no homicide charges so far 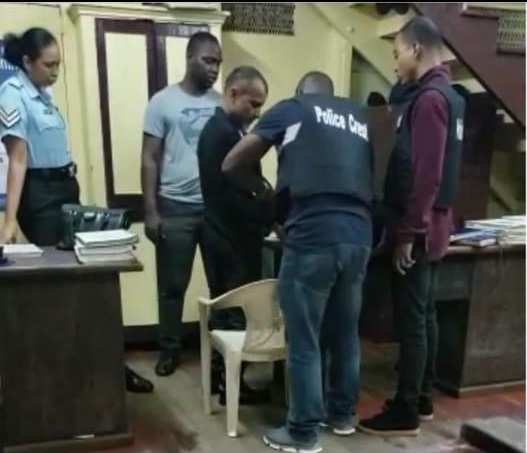 Shaheed ‘Roger’ Khan in the custody of Guyanese Police.

Guyanese police are still hoping to unearth information to link convicted drug lord, Shaheed ‘Roger’ Khan to two murders, even as President David Granger and Opposition Leader Bharrat Jagdeo weighed on a lack of evidence so far to charge the United States (US) deportee.

A top police officer told News-Talk Radio Guyana that based on requests by the Director of Public Prosecutions, police are hoping to get more information locally and overseas.

The police source did not say whether the information includes testimony by Selwyn Vaughn in a U.S. court or statements by him or anyone else that can link Khan to the gunning down of Ronald Waddell, an Afro-Guyanese activist, and Donald Allison, a former football coach.

Khan was deported on September 21, almost two months after he had been released at the end of a 10-year jail term for cocaine trafficking. He had been immediately taken into custody and questioned about the killings of Waddell and Allison and then released.

Word that police have extended their request for information overseas has come even as President David Granger says he is disappointed that there is no evidence to pin on Khan. “We may interview persons but those persons who are culprits and those persons who might have been implicated or might even have knowledge about what took place have not come forward and given us the type of evidence on which we can go to court and bring convictions. It’s very disappointing for me but that is part of the reality of what happened during the troubles; people were easily eliminated,” he said.

Granger noted that “even now people are being executed” and it is difficult for the police to find the motivation behind such executions. “I am convinced that the police force would like to move ahead further, much faster but a lot of people have been killed and dead men tell no tales,” he said.

Opposition Leader Bharrat Jagdeo on Thursday said the fact that the President said police was unable to unearth sufficient evidence to charge Khan was yet another instance of government merely leveling unsubstantiated allegations. “To my surprise, after we had been hearing all along that they would find out the truth when Roger Khan comes here, the political rhetoric that has been going on by him and the others, the President finally admits that there is no credible evidence or witnesses against Roger Khan,” Jagdeo told a news conference.

Before Khan had been captured in neighbouring Suriname and whisked off to New York for trial on cocaine trafficking charges, he had publicly taken credit for preventing the Jagdeo administration from being toppled.

Jagdeo repeated his call for Granger to call a commission of inquiry into the period, 2002-2008, he calls the “troubles” that had included numerous murders, kidnappings, abductions and robberies. “Why doesn’t he launch a commission of inquiry into the entire period…an international group and at that group we will present who were the ones, the intellectual authors and who were supplying the criminals and who were glorifying criminals,” he said.

The former Guyanese President described as a “fake list” of people the governing coalition has repeatedly said had been responsible for the extra-judicial killing of 400 mainly Afro-Guyanese.

Court records in a U.S. appeal case-United States Court of Appeals, Second Circuit. UNITED STATES of America, Appellee–Cross–Appellant v. Robert SIMELS, Defendant–Appellant, Arienne Irving, Defendant–Cross–Appellee” state that “Vaughn testified that on one occasion Khan asked him to verify the location of Donald Allison, an enemy of Khan’s. Allison was the brother of George Allison and a relative of David Clarke, both potential witnesses against Khan. Just after Vaughn informed Khan of Allison’s location, gunmen drove up and murdered him. On another occasion Khan instructed Vaughn to report the location of Ronald Waddell, a talk show host who regularly criticized Khan. Vaughn did so, and gunmen drove up and murdered Waddell.”

Khan’s lawyer, Glenn Hanoman, has said Vaughn’s claims in a U.S. Court that he is a former member of Khan’s alleged death squad and that he had had knowledge of the drug trafficker’s suspicion in the killing of Allison and Waddell, could not form the legal basis for instituting homicide charges because they had never been tested.

Khan had been virtually hunted out of Guyana, caught in neighbouring Suriname on June 15, 2006 and sent to Trinidad from where he had been collected by United States agents and flown to New York where had been convicted for cocaine trafficking after a plea bargain.