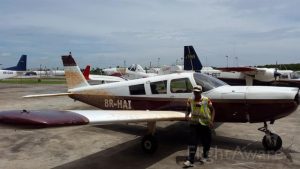 The Piper Aircraft that crashed in Guyana’s interior.

The pilot, who was the lone occupant of a small plane that crashed in thick jungle, was Thursday afternoon rescued, and preliminary information was that he sustained “minor injuries”.

Singh was taken to the Aricheng Airstrip and, according to other sources, he “is walking and talking”.

Field said the pilot would be taken for a medical examination and later he would be expected to brief accident investigators.

The condition of the Piper Aircraft that bears registration marking 8R HAI is not yet known and Field said investigators would be travelling to the crash site in the coming days.

The plane is owned by Domestic Airways (Georgetown Ogle) run by Orlando Charles.

Before the pilot was rescued, he had hours earlier signaled his location by setting off a flare.

Field said the aircraft, which was attempting to transport fuel to Ekereku, crashed minutes after taking off at 7:53 a.m. from Aricheng.