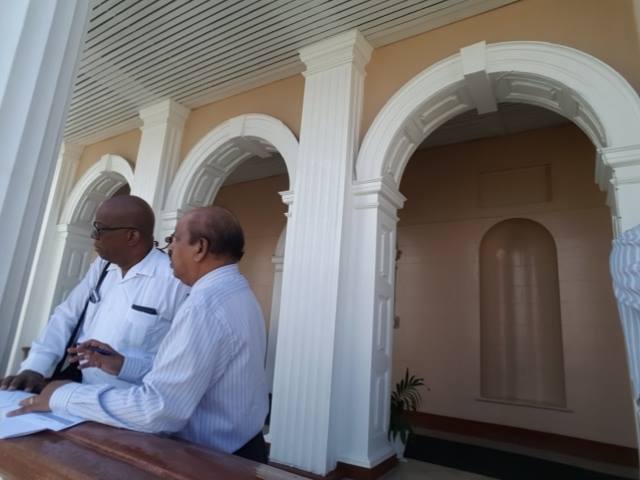 FLASHBACK: Finance Minister, Winston Jordan and Governor of the Bank of Guyana, Dr. Gobind Ganga speaking on the balcony of Parliament Building.

The Bank of Guyana (BOG) Tuesday night confirmed that it rejected the intended sale of Scotiabank’s (Guyana) operations to the Trinidad-headquartered Republic Bank, while at the same time assuring Scotiabank customers that their accounts are safe and that that financial institution could not just walk away from the country.

“Nothing will happen to their accounts. Their accounts will remain safe,” Central Bank Governor, Dr. Gobin Ganga told News-Talk Radio 103.1 FM/Demerara Waves Online News. He noted that Scotia was “doing quite a lot” by modernising its payment system and being a member of the Deposit Insurance Corporation. “They are operating as normal so I don’t think there is anything for anyone to fear. Scotia is not going to pick up just so and leave. Scotia is a profitable bank,” Ganga added.

Asked whether Scotiabank could now decide to pack up and hand over files to Republic Bank, he said that was impossible because Scotia would first have to give extended notice and comply with the relevant provisions of the Financial Institutions Act.

“I can assure everyone that their accounts at Scotiabank and Republic Bank and any other bank in Guyana. The financial system is safe and sound and I can also tell you they are highly profitable,” he added.

He said if Republic Bank was allowed to take over Scotiabank’s operations, it would have meant that Republic would have dominated the banking sector by more than 50 percent, resulting in a huge risk to Guyanese should something go wrong.

Ganga said the BOG’s decision to block the Scotia-Republic deal followed analyses done by the Central Bank and the Caribbean Competition Commission.

Still hopeful that Scotiabank would change its mind from walking away from Guyana because of the expected oil boom and significant growth, Ganga said that the Canada-headquartered bank was informed that the BOG would not oppose a sale to another foreign bank to reduce risk exposure as a result of market dominance and less humbugs to do correspondent banking. “We are not saying that Scotia can’t sell but what we are saying is that this sale will have this market dominance and adverse impact on it so we are looking for somebody who is not going to do that to the banking system,” he said.

Scotiabank’s operations in the Caribbean and many other countries use Bank of America as its correspondent bank, while indigenous Guyanese banks have been using other intermediaries like the United Kingdom-based Crown Agents Bank Limited in order to conduct international money transfers.

The BOG successfully persuaded the India-headquartered Bank of Baroda not to sell out its operations in Guyana.

The Eastern Caribbean Central Bank recently approved the sale of Scotiabank’s operations in the sub-regional member states except Antigua and Barbuda whose government has refused to approve the sale.