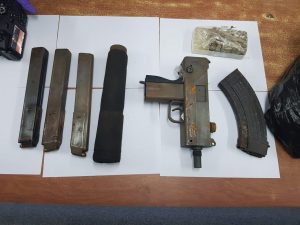 Police say they have arrested seven men and hauled in a high-powered gun, a silencer and several rounds of ammunition from a business place opposite Merriman’s Mall in the vicinity of Bourda Market.

Officially, police did not name the location but News-Talk Radio Guyana 103.1 FM/Demerara Waves Online News was told that the entity operates a security company and a jewellery store.

The Guyana Police Force said one of the persons arrested is a licensed firearm holder.

The Guyana Police Force said “an intelligence-led operation on Tuesday at about 14:30 hours resulted the arrest of the men and seizure of one .45 sub-machine gun serial number filed off along with three magazines, one silencer, 120 live rounds of .45 ammunition and one AK 47 magazine.

The items, police said, were in a store room on Church Street, South Cummingsburg, Georgetown.