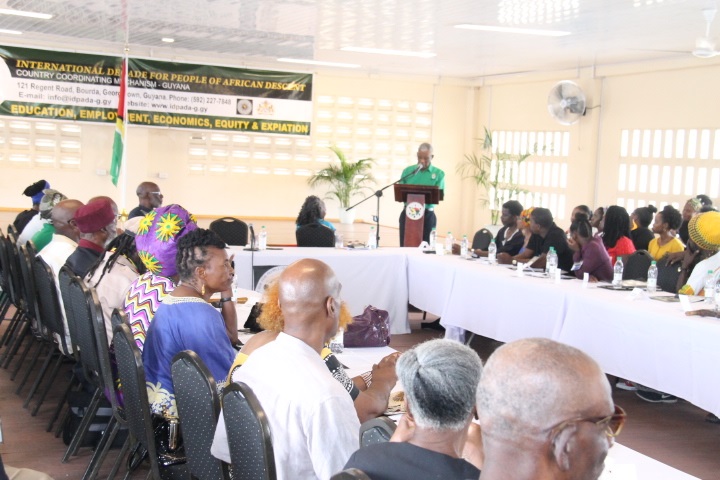 President David Granger on Sunday chided descendants of former European colonisers for attempting to “correct” instead of apologising and compensating for African slavery, at an address to the 2nd annual general assembly of the International Decade for People of African Descent Assembly – Guyana (IDPADA-G).

Guyana is part of a Pan-Caribbean initiative, through the Caribbean Community, that is demanding reparation from the United Kingdom and other European countries for the impact of slavery.

His remarks came days after the United Kingdom, United States and the European Union (EU) last week jointly frowned on the Guyana government’s failure to call general elections before September 18, resulting in a breach of the country’s constitution.

They were referring to the three-month timeframe within which they believed the President should have called general elections after the Caribbean Court of Justice (CCJ) ruled in June, 2019 that last December’s no-confidence motion was validly passed.

Guyana’s constitution states that on the passage of a no-confidence motion general elections must be held within three months or at another date subject to approval by two-thirds of the 65-seat National Assembly. The People’s Progressive Party (PPP), which has 32 seats, has refused to lend its support for such an extension.

President Granger has already rejected the American, British and European Union’s position that the constitution has been breached, while reiterating that he is relying on the Guyana Elections Commission, a constitutionally “independent” body to say when it will be ready.

GECOM Chairman, Claudette Singh last week wrote the President informing him that the elections management agency would be ready to conduct general and regional council elections.

Before the passage of the no-confidence motion, general elections were constitutionally due the latest by August, 2020.