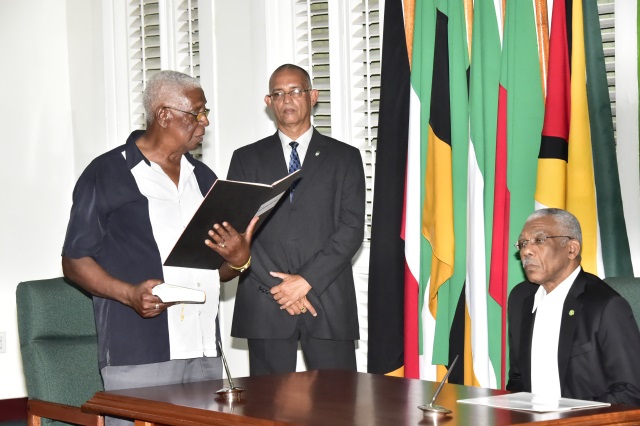 Desmond Trotman taking the oath of office as Elections Commissioner before President David Granger at State House on Friday, November 24, 2017.

The Working People’s Alliance (WPA) on Friday said it gleaned that general elections could be held in December, based on the house-to-house registration schedule and preparations for the polls.

Executive member, David Hinds said if the Guyana Elections Commission (GECOM) sticks to its calendar for house-to-house registration, which began on July 20, to be completed by October followed by claims and objections, “we think that reasonably elections, as a compromise, could be held in December.”

He indicated that the WPA’s forecast was based on information provided by its executive member, Desmond Trotman, who is one of the pro-seven Guyana Elections Commissioners. “It’s a view that we take after deliberations. You know, we have our representative at GECOM and so we have a sense of what’s happening at GECOM in a way that we didn’t before and based on what we are hearing from our representative, we think that GECOM can wrap up in due course,” Hinds said.

Demerara Waves Online News has been reliably informed that government is contemplating calling elections around mid-December.

Finance Minister Winston Jordan earlier this week said if general and regional elections are not held before the 2019 National Budget expires on December 31, government would have to resort to spending one-twelfth of this year’s budget on current expenditures, and finance roll-over capital projects. Jordan said government would be unable to fund new capital projects.

President David Granger has said he is awaiting word from GECOM Chairperson, Retired Justice Claudette Singh after she and her six commissioners consider Chief Justice Roxane George-Wiltshire’s decision on Christopher Ram’s application that had sought to have house-to-house registration scrapped.

The commission was up to Thursday still awaiting a copy of the written decision before making a pronouncement and advising the President. The crux is whether to continue the house-to-house registration, which has already captured more than 230,000 names, to verify the national register of registrants from which the voters’ list is extracted.

Justice George-Wiltshire ruled that house-to-house registration is not illegal or unconstitutional and that once registered, people’s names could not be taken off the national register of registrants unless they are dead or lose their Guyanese citizenship.