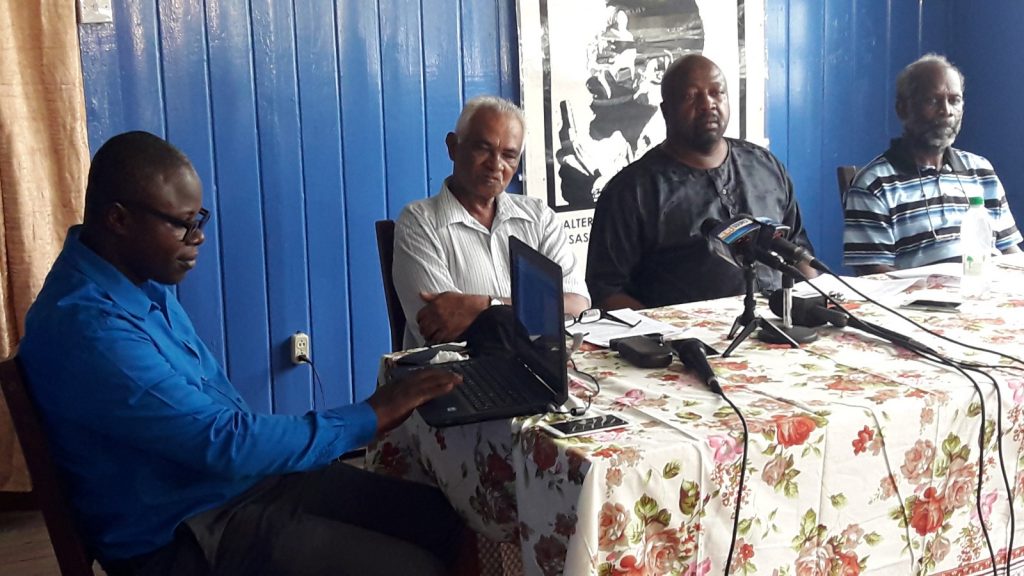 The Working People’s Alliance (WPA) on Friday  admitted not doing enough to push the government to address failed promises such as constitutional reform, collective bargaining and award of contracts to small contractors, but could offer no guarantees that there would not be a repeat if the governing coalition wins again.

Executive Member, Dr. David Hinds said during an ongoing series of public meetings countrywide that there is a “very, very stubborn” section of youths who are refusing to register on the grounds that the David Granger-led coalition has “done nothing for them”. Additionally, Hinds said the other section is made up of people who want guarantees that the coalition would keep its promises.

“I think the government itself is hearing those shortcomings, criticisms when it goes into the communities and, as political people, we hope that they would adjust their attitude should they win again; beyond that, there is no guarantee that we can make,” said Hinds, a political science professor.

Hinds said there was a greater chance of Guyanese realising the vision under the coalition rather than the opposition People’s Progressive Party. “Those things have influenced us to continue with the coalition, despite our misgivings,” he said.

Asked why the WPA was still sticking with the coalition in light of the shortcomings, Hinds said the Granger-led administration has scored high marks in areas such as no racial discrimination, and political and death squad killings. “We feel that above and beyond these shortcomings that there are certain very big things that the government has succeeded in doing and the first thing that we want to draw attention to is the fact that this has been the first government in the history of Guyana—pre-independence and post-independence—that has not gunned down political opponents. We have not had any political assassinations under the watch of this government. We have not had opposition figures being thrown in prison for treason and other trumped up charges,” he said.

Fellow WPA executive member, Tacuma Ogunseye also hailed the APNU+AFC coalition for ending the criminalisation of the state in areas such as phantom killings, drugs trafficking and repression of mainly African workers. “We believe that these are significant improvements within the country and we believe that those things contribute to us believing that the country has a better chance to move forward with a coalition government,” he said.

The WPA continues to blame the Forbes Burnham-led People’s National Congress (PNC) for the bomb-blast death of its founding co-leader, Dr. Walter Rodney on June 13, 1980. Under the PPP, talk-show host Ronald Waddell was gunned down, political activist Mark Benschop, Major Bruce Munroe and his wife, Carol-Ann Munroe had been jailed on separate treason charges, and ex-GDF officer Oliver Hinckson had been charged with sedition.

The WPA credited the government with “considerably” toning down political fear in Guyana, resulting in confidence in government and democratisation. Touching specifically on President Granger, Hinds said the Guyanese leader has brought back dignity in the presidency because of his uprightness and incorruptibility in holding the society together.

In the area of race relations, the WPA argued that the coalition “was very careful not to throw Indian Guyanese under the bus” by continuing to subsidise the loss-making Guyana Sugar Corporation until thousands of sugar workers were eventually clumsily laid off and several sugar estates closed. “We in the WPA would argue it’s the closest that they came to a positive policy initiative but they made mistakes in terms of closing down estates and not having ready recourse and substitute for the workers but we thought the policy of reforming sugar and in so doing the government has contributed to some kind of relationship with the East Indian brethren and sisteren,” he said.

While many African Guyanese complain that they have not benefited from the government since 2015, Hinds said that could be viewed as a positive because the administration could not be accused of having an ethnic preference.