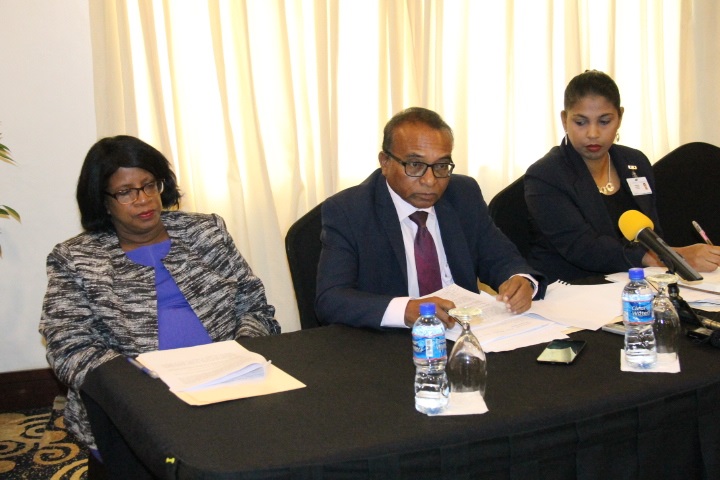 More senior police officers and other top public officials may soon be asked to declare their assets to the Integrity Commission, even as it requires more money and investigators to go after those who already refuse to submit declarations, officials announced Wednesday.

He indicated the move to add more persons was aimed at removing doubts about their integrity. “I think because the police department is so large and so many sections they have… we should include these people. These are people in positions who can be susceptible somehow to people approaching them and we have heard all kinds of allegations…,” he said.

The Chairman said it is not only the Police Commissioner who should be held accountable.

Also to be added are the Financial Intelligence Unit, State Assets Recovery Agency and the Special Organised Crime Unit of the Guyana Police Force. “People holding public office must be accountable to the people who pay them…,” he said.

The Chairman of the Integrity Commission said eventually the Ministry of the Presidency’s Department of Energy would be added to the schedule of agencies and persons who need to make declarations. Asked why that department has not been included now, he said it is yet to be fully operational and oil production would not begin until next year.

“Right now, the department is not functioning fully. We haven’t produced a drop of oil yet and I think it’s till next year we are supposed to produce oil and once that department gets functioning fully, we’ll be aware of all the public officials who are involved in it,” he said.

That list has to be sent to the Prime Minister for approval.

Duraisami said the Integrity Commission needs more monies to fund its operations including hiring five investigators to go after hundreds of public officials whose names have been published as failing to submit declarations. He said the Commission needs GYD$86 million for current expenditure, but only got GYD$45 million which means the Finance Ministry would be asked for more funds.

“We don’t have any investigative officers so we are trying to secure some and we’ll have to train them. Once we have the investigative officers, we’ll be fully armed to go after those declarants who got their declarations done but they don’t put in all that they ought to put in and we have to ensure that they have to comply fully with the law and if they don’t, then the next stage is prosecution,” he said.

Figures show that of the 478 persons whose names are published, 315 have responded. Of the 1,306 forms that were sent to public officials, 590 responded. The next publications will include officers of the Ministry of Finance and members of the judiciary. Duraisami observed that there have been murmurs about whether judicial officers must submit declarations to the Integrity Commission. In that regard, he said they were free to challenge it in court.