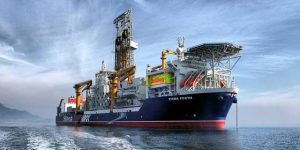 Tullow Oil has contracted a drillship to spud an exploration well on the Jethro-Lobe prospect on the Orinduik Block, off Guyana.

Eco confirmed the contract secured the drillship for transport at the end of May, with the well on the Jethro-Lobe prospect expected to spud in June.

“The partners selected the 250 million barrel Jethro-Lobe Tertiary prospect in December, which is only a few kilometres away and up dip from multiple Exxon discoveries in the region and in the same proven resource intervals,” Eco chief operating officer Colin Kinley said.

“While the Jethro-Lobe is a Tertiary target, which we believe is similar to the Exxon Hammerhead discovery that appears to extend onto Orinduik, we will also drill down to test the Cretaceous section below Jethro.”

The contract also provides the joint venture with the option to use the Stena Forth for a second well on the Orinduik Block, with long lead items for the two wells already secured and ordered.

Wellheads have been ordered from DrillQuip, and support ship and infrastructure agreements are underway.

Eco added that the Orinduik partners, which along with Tullow and Eco also includes French giant Total, were currently reviewing plans for the second well which would likely be formalised in the coming weeks.