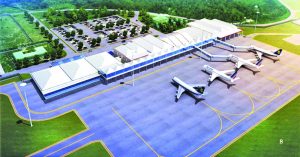 An artist’s impression of the expanded Cheddi Jagan International Airport.

China Harbour Engineering Company (CHEC) will by the end of January, 2019 be fined more than U$200,0000 or US$7,000 per day for missing the 31st December, 2018 firm deadline to complete the US$150 million Cheddi Jagan International Airport (CJIA) expansion project, Public Infrastructure Minister David Patterson said Monday.

Ruling out an extension of the deadline, Patterson said the company would be charged the daily fine until the project is finished “We are not granting any extensions after December 31st 2018. In our opinion we believe that the contractor did not have adequate resources to ensure that he met his contractual obligation,” he told reporters at the project site.

Talking tough, Patterson insisted that it is CHEC’s “obligation to finish the project” by the stipulated deadline and after failing to do so the US$7,000 “penalty is currently being instituted.”

CHEC, according to the Public Infrastructure Minister, has informed government that the project – which includes four air bridges for arriving and departing passengers, a 450-seater departure area, and an extended runway – is 92 percent completed.

The company has since set itself a new deadline of March 31, 2019. Based on calculations, by that time the company is expected to pay fines totalling almost US$630,000. If 5 percent of the total contract cost was used, it meant CHEC would have to fork out US$750,000 in penalties. “It is taken out from the total contract sum. Every month the total valuation will be done… any contract will give a breakdown. You did this, you owe this, this is your damages and you make the deductions,” Patterson added..

Patterson lamented CHEC’s failure to meet last month-end’s deadline, suggesting that was because the company had failed to invest in the requisite personnel and equipment.

Originally, the company was expected to complete the works in 2017 but that deadline was pushed back to last December, partly due to a slippage of the extension of the southwestern end of the runway.

The major benchmarks of the project are: