Person threatening School of the Nations willing to open negotiations with police; police ready to talk 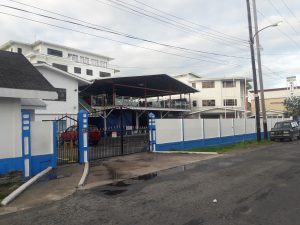 CLOSED: School of The Nations

The Guyana Police Force stands ready to meet with the person who claims to have been issuing violent threats against School of the Nations, after the individual said he/she was willing to open negotiations with police for protection because his/her colleagues have turned against him/her, a senior police officer said.

“The force is prepared to meet with this individual but to make a public statement at this time is premature taking the safety of the individual into account,” Deputy Police Commissioner, Lyndon Alves told Demerara Waves Online News.

The threats that have been circulating on social media platforms are believed to be linked to the shooting of School of the Nations Principal Brian O’Toole. The school has since decided to cancel classes until next week.

“School [of the Nations] will be closed for the rest of the week until Monday 4th February as we put things in place to ensure the security of all on campus. The administration will meet with parents/guardians before Monday to give an update and share our plans to move forward. Teachers will be in school from 9 to 2 every day in case students or parents need support of any kind,” School of the Nations said in a brief statement to parents.

Meanwhile, the anonymous person, who preferred to be called ‘Kira’ claimed that his or her life was now in jeopardy, but there was no clear indication that he or she wanted to surrender. The individual claims his life is in danger and his colleagues who have planned “to do something more extreme than I will ever attempt… have turned their blade against me as a form to silence me”.

The person challenged the Guyana Police Force to publicly state that they would be willing to talk with him or her after which he or she would reveal his or her contact information and identity. “If the police publicly announces that they have read my posts and are willing to cooperate in any way, I will then make another post, detailing the ways you will be able to contact me. I will also reveal my identity,” the person said.

At the same time, the individual said if the police attempts a trace, he or she would cancel the “proposed negotiations”.

“I was only going to be an advocate for them and a misdirection for their crimes but now I fear for my life… I will cooperate with police in exchange for protection,” ‘Kira’ said in the latest post believed to have been made on Facebook, screengrabbed and circulated via WhatsApp and other social media platforms. 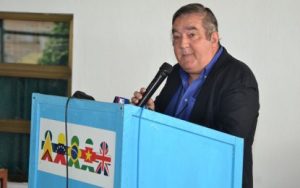 The person claimed he or she knows there is a plot to blow up the school within two weeks. “They have this in other areas too. This is not a threat. This is something I know for sure. I have seen their methods and plans,” the person states.

Dr. O’Toole is in a city hospital recovering from gunshot injuries that he sustained when someone ambushed him outside the door to his residence at about 9:45 Sunday night.

School of the Nations should have reopened its doors on Tuesday.
However, its administration buckled and closed the institution for a second straight day after parents demanded clear-cut information on security and emergency measures.