School of the Nations administration faced with unanswered security questions 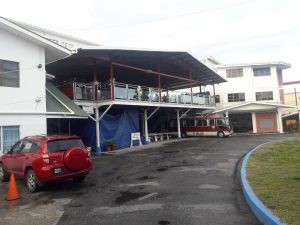 Under a barrage of questions by concerned parents about security plans and emergency response, the administration of School of the Nations decided to close the institution’s doors for a second straight day on Tuesday while they come up with proper answers.

Chief Executive Officer of School of the Nations, Dr. Dexter Phillips did not answer many pointed questions that parents posed. “When I listen to this discussion, it sound like a dolly house. We are dealing with a real threat. Somebody could come with a gun and they could shoot up the children so because of that, Sir, the school has to get a better plan to solve everybody concern,” a concerned parent told the meeting.

The school has hired a private guard service and every visitor is now required to sign a log. Phillips also announced that two or three members of the Guyana Police Force would be at the school or outside, but one of the parents raised the likelihood of a gun being smuggled in a smaller child’s bag.

The school was closed on Monday after its Principal and co-founder Brian O’Toole was shot late Sunday night as he was about to open the door to his residence at Bel Air Promenade, Prashad Nagar, Georgetown. He is recovering from gunshot injuries to his arms at a city hospital. It is unclear whether that incident was linked to violent threats on Facebook following the expulsion of a student who had issued the first threat which he then called a joke.

Dr. Phillips announced at the start of Monday afternoon’s meeting that the school would have reopened on Tuesday, but after spirited discussions and numerous questions were thrown at him, he consulted with other senior staff. “You guys are not prepared for tomorrow” and “I will not be sending my child to school”, a parent said.

On his return two minutes later, Phillips announced that classes for Tuesday would also be cancelled to allow the administration to address parents’ concerns about security. “The number one suggestion here is that we consult with our security team,” he said.

Parents have tasked the administration to return at the next meeting with a clear security and emergency response plan. Pressed on about the plan for providing “direct security”, Phillips remarked that “the plan is to get the children through the gate as quickly as possible and we are considering all options.”

The Chief Executive Officer, in response to questions about why the students have not been briefed, Phillips said that is why the administration wants to get them back to school.

One parent recalled one of the threats on Facebook had contained concerns about having been victimised. “Nations has a terrible reputation of having a culture of bullying at the secondary level. This child claims victimisation, the one who is posting,” he said. That parent also called on the administration to inform parents on plans to deal with bullying and child development. “We have to deal with the emotional and social well-being of these children and address the issue of bullying. Please let me know that that is something that will also be addressed,” the mother said.

Meanwhile, O’Toole, in a statement from his hospital bed, said he was getting the “best possible treatment”. He recounted the shooting incident late Sunday night. “There were three bullets fired at me. I was struck by two of them. One did minor damage on the right arm and the other was more serious on the left where the bone was badly damaged. I am getting better and will likely be in the hospital for a few days,” said O’Toole.

He and his wife, Pam, thanked parents for their compassion. “Both Pam and I have been deeply touched by the outpouring of support and love. We look forward to working with you to restore Nations to the safe and secure home that it usually is for all of us.”