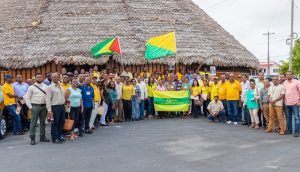 AFC’s NEC after its meeting on Saturday at the Umana Yana in Georgetown.

The Alliance For Change (AFC) executive on Saturday called for oil revenues to fund the reintroduction of free education from nursery to university, and housing.

“The party also unanimously approved a motion to unequivocally support free education from nursery to university and facilitate housing for all Guyanese with revenues to be derived from oil,” the party said in a statement. However, the statement gave no details on eligibility criteria.

In recent weeks, the AFC, and the Working People’s Alliance (WPA), the APNU affiliate, had been collaborating on Distinguished Economics Professor Clive Thomas’ idea of conditional cash transfers, probably US$5,000 annually from oil revenues to some poor Guyanese households.

Also, at the end of its National Executive Committee (NEC) meeting held at the Umana Yana, High Street, Kingston, the party stated that it did not want any changes to the February 2015 political agreement with A Partnership for National Unity (APNU).

“The NEC unanimously approved a motion for the APNU+AFC Coalition to be maintained as per the Cummingsburg Accord for the next General and Regional Elections, whenever it is held,” the AFC said.

Among the provisions of that agreement named the Cummingsburg Accord are that the AFC would be entitled to 12 seats, two vice presidential positions including the Prime Ministerial post which is itself the 1st Vice President. The AFC is responsible for domestic security, telecommunications, public infrastructure, natural resources, business, tourism, agriculture, state media, and governance including constitutional reform.

At the 2011 general elections, the AFC had seven seats, but question marks have been raised about whether its electoral strength has waned since the 2015 coalition with APNU.

The AFC has downplayed its voting strength and showing at the November 12, 2018 Local Government Elections which it contested on its own. That party has claimed that it garnered between four and 10 percent of the popular vote making it still a party to be reckoned with.

The People’s National Congress Reform (PNCR) which dominates APNU, has not won more than 40 percent in elections that are considered free and fair.

While the NEC did not decide on who would be the prime ministerial candidate, AFC Leader Raphael Trotman, in his address reaffirmed his confidence in the David Granger-Moses Nagamootoo leadership to guide the Coalition Government in the period ahead.

After the signing of the Cummingsburg Accord on February 14, 2015: David Granger of APNU and AFC’s Moses Nagamootoo.

Like APNU and the opposition People’s Progressive Party which have in recent weeks been focussing heavily on the importance of youths, the AFC said it “recognized the need for greater and meaningful involvement and participation of young people in the next Coalition Government.” “Further the party recognized the need for greater empowerment and the provision of more opportunities for the young people of Guyana,” the AFC added.

The AFC’s executive did not dwell on its or the government’s failure to deliver constitutional reform, but “renewed the party’s commitment” to that goal.

Trotman admitted that the “AFC did make some missteps in government and that the party must work harder to deliver for the Guyanese people” but he did not identify them.

2019-01-26
Denis Chabrol
Previous: PPP Irfaan Ali churns out campaign promises to Berbicians
Next: OPINION: What if the actuality of the presidency? Real possibilities!