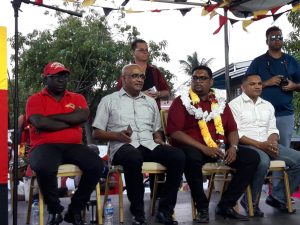 PPP General Secretary Jagdeo and the presidential candidate Ali next to him.

The People’s Progressive Party (PPP) presidential candidate, Irfaan Ali, on Saturday announced that some retrenched sugar workers would be compensated and the two East Berbice sugar estates – Skeldon and Rose Hall-Canje – would be reopened.

“The first thing we are saying to you is that we are going to reopen the estates here in Region 6 [East Berbice-Corentyne] and we must find the resources to compensate, to help some of those families that were destroyed, some of those families that took the brunt of the closure of the estates,” he told about 2,000 persons at a PPP public meeting held at Miss Phoebe, Port Mourant, Corentyne, Berbice, east of Guyana.

Port Mourant is considered the PPP’s heartland as it was the home village of the party’s late founder-leader, Dr Cheddi Jagan.

Ali assured that monies would be found to ensure those campaign promises are kept because “sugar is more than a financial statement” and its closure has had a “trickle-down effect” on businesses because people no longer earn money to spend. He noted that “sugar is linked to every aspect of life” such as drainage and irrigation, health and education.

The Shadow Finance Minister said the bleak socioeconomic conditions in East Berbice-Corentyne were compounded by the Granger administration withdrawing the transportation grant for children, uniform allowance and the subsidy on electricity and potable water. Those financial benefits, he also promised, would be restored by the PPP if it wins the next general elections. “We say to you this evening that within the first month of government, we’ll restore these benefits back to the people of our country,” he said. Ali said the monies would be found to restore those benefits by cutting out waste on food, international travel, security services and ‘dankadalay’ (sporting). 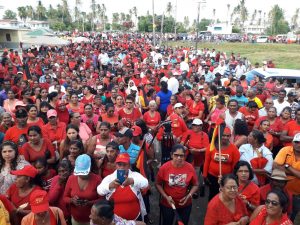 A panoramic view of the attendees at the PPP public meeting at Miss Phoebe, Berbice.

On housing, the former Minister of Housing said while house-lots would be provided, special attention would be placed on “home ownership” for young people, single parents and families across the country.

In the area of security, he said Information and Communications Technology (ICT) would be deployed and intelligence gathering would be boosted. “We are going to address the issue of security very proactively and aggressively… We are going to address crime from a community level. We are going to build an intelligence-led network that will fight crime from the community level so that we can proactively go after criminals and those who are in the business of crime,” he said. Ali hinted at salary increases for members of the Guyana Police Force.

He said a PPP administration would revive the Amaila Falls Hydropower project and other forms of sustainable and efficient electricity supply for the benefit of manufacturers.

Ali pledged to stimulate agriculture production by improving farm-to-market roads, making it easier to acquire land titles, removing the 1,200 percent increase in land rates, exploring new areas of investment such as aquaculture, and reducing the cost of inputs for rice production while negotiating with banks to reschedule loans.

Unlike the public meeting at Leonora, West Coast Demerara, Ali did not mention that oil revenues would be used to fund projects and increase employment in Berbice.