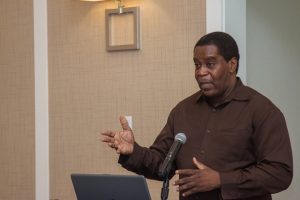 Administrative regions where mining is the main economic activity could get a small percentage of the earnings, if Cabinet greenlights the draft National Mineral Sector Policy Framework and Actions, officials said.

Consultant and Exploration Geologist Sherwood Lowe told reporters that the recommendation was made by Region 10 Chairman Renis Morian during an outreach to stakeholders.

Lowe said his report to the Ministry of Natural Resources captures that recommendation for all mining-dependent administrative regions. Similar to the Amerindian Purposes Fund that gets some royalties, he said a fraction of the revenues could be allocated to the mining regions to fund small projects such as roads and bridges.

“We are recommending that for all the mining regions must have a fund that is topped up from royalties where the RDCs [Regional Democratic Councils] and the villages and the NDCs [Neighbourhood Democratic Councils] can access for particular purposes – small capital projects where people can see the link between mining in their backyard and the benefits of that mining,” he said. Lowe said the regional fund must be well-managed with strict guidelines for spending.

Minister of Natural Resources Raphael Trotman told a broad range of stakeholders at a presentation of the draft mining policy that the document would be dispatched to Cabinet for approval before it is tabled in the National Assembly.

Lowe noted that among the implementation risks to be considered are changes in government or ministers and a lack of buy-in by officials who might not be committed, as well as a shortage of cash.

As for protracted grievances by miners, the draft policy recommends the establishment of an independent Inspector General to settle disputes and grievances and make recommendations to the Guyana Geology and Mines Commission (GGMC). “It is the millions of complaints and the biggest one is ‘I’ve been waiting ten months/one year and I haven’t heard anything about my complaints’ so you need an authority to put pressure on GGMC to go and follow up on these matters and report back to the complainant,” Lowe said. Major complaints, he added, are corruption, unequal treatment, and slothfulness.

Lowe envisages the Inspector General will be set up using the same bipartisan parliamentary system that is employed to establish the constitutional commissions. He disagrees that the Inspector-General will put added pressure on the GGMC that is already suffering from a shortage of manpower. “The Inspector General’s office will also make recommendations for improvement. Also, the fact that somebody is watching over you can serve to force you to perform better. If you know at the end of the day, there is going to be a watchdog to monitor your performance, evaluate your performance, that may help the process. Also, the Inspector General’s Office must advice GGMC how to streamline its procedures and such things so it’s a win-win,” he added.

A representative of the National Mining Syndicate and the Chairman of the Guyana Gold Board, Gabriel Lall, welcomed the idea of instituting an Inspector General.

Hilbert Shields, who has been in the business of bauxite and gold mining for decades, also called on the GGMC to make its geographical mining data and laws available online, instead of expecting investors to tumble through cupboards for such vital information.

In the area of compliance, the committee recommended that general managers be trained and certified and “held accountable for environmental, occupation health and safety compliance.” “A point must be reached where you can’t be a GM [general manager] unless you’re certified,” he said.

In addition to Lowe, the other Mineral Policy committee members are former GGMC Commissioners, William Woolford and Karen Livan.

According to Minister within the Ministry of Natural Resources, Simona Broomes, her department will now ensure the policy reaches those persons on the ground who could not have attended the unveiling session today.

“There are five mining districts and so we will have a team visiting these mining districts to engage the small miners, explaining the policy to them and giving them the opportunity to ask questions as to how it will either affect or benefit them,” Minister Broomes said.

Region One (Barima-Waini) is known for gold and manganese mining, while Region 7 (Cuyuni-Mazaruni), Region 8 (Potaro-Siparuni), and Region 9 (Upper Takatu-Upper Essequibo) produce gold and diamonds, and Region 10 (Upper Demerara-Upper Berbice) is rich in bauxite.

Exploration for uranium and lithium in Region 8 has been done in recent years. It is also believed that the New River Triangle in Region 6 (East Berbice-Corentyne) is rich in rare earth minerals.