Election date up to Granger; Jagdeo after stalemate on GECOM readiness 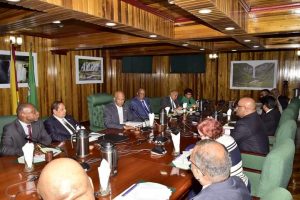 President Granger and Opposition Leader  Jagdeo meeting earlier this month on the implications of the no-confidence motion that was approved by the National Assembly in December 2019. (file photo)

President David Granger and Opposition Leader Bharrat Jagdeo would now have to decide on a timeframe for holding general elections following last month’s passage of a no-confidence motion, after their emissaries got no clear indication from the Guyana Elections Commission (GECOM) on when elections could be held.

Already, the Opposition Leader has said he would be willing to strike a compromise for a claims and objections period instead of house-to-house registration that could last at least six months.

“If the desire is there, they can easily do a one-week continuous registration and urge everybody to come, starting that next week, because they have these offices already; that’s where the people go. Then, one week more for claims and objections… Within two weeks, it could be fixed – an accelerated timeline. Then all those young people can have an opportunity,” Jagdeo was quoted as saying by the privately-owned Kaieteur News newspaper.

Granger’s envoy Amna Ally emerged from the more-than-two-hour meeting with the seven-member Commission, saying that from all that she has heard the elections could not be held by March 21st. “The PPP is giving timelines to suit a 90-day period. Both GECOM and the governing coalition commissioners do not see it as being feasible within that timespan,” she said. Adequate training, she said, would take a “chunk of time”, permanent staff have to be employed, and a matter with the Ethnic Relations Commission were among the issues. “Definitely from what I see, from what we have heard, GECOM cannot be ready for the next 50 days,” she said. Ally said she would be telling the President what transpired at the meeting and he would exercise his “prerogative”.

Jagdeo’s emissary, Gail Teixeira, when asked whether the PPP would be willing to consider a claims and objections period for the voters’ list which expires on April 30, 2019, recalled that the Opposition Leader has already said he would be open to such an idea.

The PPP executive member insisted that her party wants the general elections to be held within 90 days now that the no-confidence motion has been passed on December 21, 2019. “If it is that they want to go to a house-to-house registration, that’s eight months to a year from now. That is unthinkable for a two-thirds majority,” Teixeira added.

PPP-nominated elections commissioner, Bibi Shadick said Jagdeo has indicated that he would be willing to consider a short extension of that deadline as is provided for in the constitution. However, that was not discussed at Friday’s meeting.

Chief Elections Officer Keith Lowenfield met on December 22nd and “prepared a work-plan” to abide by the 90-day time frame but he has not revealed the plan and how many days are required.

The PPP has expressed optimism that elections could be held in about 50 days if equipment, ballot paper and other items are purchased, polling day staff are trained and the voters’ list is updated to add eligible voters.