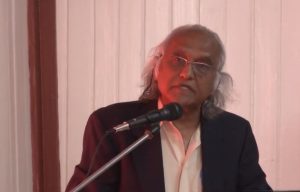 Fearing a constitutional crisis and adverse impact on the investment climate if general elections are not held by March 21, 2018, well-known political commentator Christopher Ram has petitioned the High Court to immediately order the President and Cabinet to resign and for Guyanese to go to the polls.

He wants the High Court to find that the no-confidence motion was validly passed on December 21, 2018 after which the President and Cabinet must resign “with all convenient speed”,  the government – excluding the President and Cabinet – should remain in office until a new President is sworn in after elections to be held within 90 days after the motion was passed, or a period extended by two-thirds of the National Assembly.

“The resolution of this matter as quickly as possible is of the most urgent national importance in order to avoid a constitutional crisis in Guyana and it is my application that all timelines be abridged as necessary in order that the proceedings can be determined as a matter of utmost priority so as to prevent the country from suffering the dire effects which can arise from a constitutional crisis and the ensuing chaos, confusion and uncertainty,” he said in his affidavit.

This is the fourth legal action to have been filed in less than one week since House Speaker Dr. Barton Scotland said issues surrounding the December 21, 2018 no-confidence motion should be settled by the Court.

In this latest case, in which Ram is the applicant and the respondents are Attorney General Basil Williams and Opposition Leader Bharrat Jagdeo, the High Court is being asked to declare that the no-confidence motion is valid because of concerns about the business climate  and Guyana’s political stability.

“The failure of the Cabinet including the President to resign with all convenient speed and to fix a date for elections no later than 21 March 2019 has led the country into uncertainty and will lead to a constitutional crisis if neither of those things happen in accordance with the provisions of the Constitution by 21 March 2019.

A constitutional crisis, and the uncertainty and instability resulting from it, is likely to cause investors to be reluctant to invest in Guyana and could have dire consequences for democracy and the rule of law in Guyana, for the economy and for the international reputation of the country,” said Ram, who is also a citizen of the United Kingdom.

Referring to the case already filed by private citizen Compton Reid, apparently in favour of the Guyana government, Ram said both in the ordinary and technical meaning of majority, the motion was properly passed by 33 to 32. The Attorney General wants the High Court to find, in a case filed earlier this week, that the motion could only pass by an absolute majority of 34 votes, after rounding up 32.5 or half of the members of the National Assembly to 33 and adding 1.

On the issue of the validity of the ‘Yes’ vote by now recalled government parliamentarian, Charrandas Persaud, because he is a Canadian citizen and was in the first place ineligible to be an elections candidate moreso a member of the National Assembly, Ram contended that the Guyana Constitution further preserves the validity of parliamentary proceedings in such instances.

Ram added that the Constitution itself sets out specific penalties for persons, who were ineligible to sit in the National Assembly, and “it is presumed that those are intended to be the only ones available.”