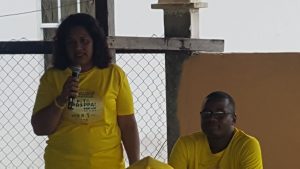 The Alliance For Change (AFC) on Sunday said it was campaigning on “deliverables”  instead of promises, and intends to hold the balance of power to make up the Neighbourhood Democratic Councils (NDC).

“It does not matter how the election goes, I am telling you at most of the councils they will need the AFC vote for either AFC to be Chairman or Deputy Chairman. The PPP (People’s Progressive Party) and APNU (A Partnership for National Unity) would not be able to win any majority in many of the areas. People right now on the ground they really want a change,”  AFC Founding Member, Michael Carrington told a community meeting for East Bank Demerara councillors on Sunday.

Carrington said without the AFC, APNU could not win an election on its own. “There is no way APNU could beat the PPP (People’s Progressive Party) by themselves. They need help to remove the PPP so we are a strong force. They may say we are a small party but without us we would not have been in government today,” he said.

Referring to a recent encounter between AFC and APNU supporters at the Lethem Town Week, Carrington said when his party’s candidates arrived, APNU supporters told them they could not share any campaign material there. because they were in control. “Everybody hear them and everybody dislike them so AFC  has a good chance. Is only we could fail ourselves. We need to go out and we need to work and we need to talk to the people,” he said.

Carrington credited his party with still having a good appeal and common touch among ordinary people. “The way AFC could walk and touch at every door and people accept them, PPP and APNU can’t do it in many areas. You see they walk around but you see they just go in and they gone. When we land in a place, people want to hold us down for half an hour…because the people love the AFC,” he said.

AFC Candidate for the Mocha Neighbourhood Democratic Council, Abeva Curt charged that the incumbent councillors were not acting in the best interest of the communities. 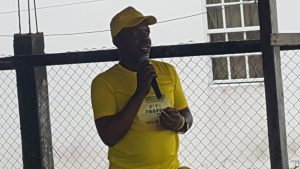 “The party that is in charge took advantage of that situation where they would have put persons, selected persons to sit on this council which has twelve councillors and what you find (is that) people try to give to themselves, give to their families and there isn’t any major development as it relates to the ordinary man,” said Councillor, Abeva Curt.

Curt said information has been circulating that some decision-makers have 12 to 18 acres of land. “Myself and another councillor have decided to step aside because we can’t support that because that is not right because the ordinary man is not benefiting,” he said.

Curt was optimistic that the AFC would take  10 of the 12 seats and give two to the losers so that the council is scrutinized. “We want to have scrutiny. We want to have openness so my message and my encouragement this afternoon to my fellow candidates on the East Bank is that we are not in for our families but we are in for the development of our community because I believe local government is a time where persons should find this neighbourhood spirit,” he said. 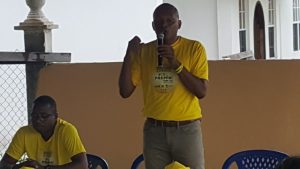 Georgetown City Councillor and former Deputy Mayor, Sherod Duncan echoed Curt’s concerns about some of the incumbents in NDCs. “They are tired of the incumbents who are occupying the leadership of City Hall and I guess by extension the leaderships of the NDC because, as our colleagues from Mocha have been stating, people feel that ‘it is our time now and we can do what we want to do; the PPP had their time and it’s our time’ and it’s not ‘our time’ in the sense of doing positive things for the community but ‘it’s our time’ to full our pockets and do other foolishness but we don’t believe that. We believe that we have to work hard for the citizens of this country,” said Duncan who was a strong campaigner against the controversial parking meter project in Georgetown on the grounds of transparency and accountability.

AFC Candidate Allison Mohammed, who is representing Diamond (Constituency 2), East Bank Demerara, said her party was going into the November 12 local government elections based on achievements. 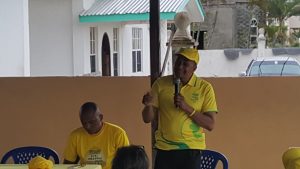 She said over the past two years herself and Lolita Hicks formed Community Development Committees and since then they have received assistance from the Minister Agriculture, Noel Holder to clear open spaces to be used as playgrounds. Mohammed noted that it was not easy to clear drains and overgrown parapets, in contrast to the 6th Avenue playground, 11th Avenue playground and the lone ground in Grove new Housing Scheme.

Mohammed expressed confidence that the AFC “will take the NDCs and we will make a change in these communities”. “We make the residents understand that we will deliver. We will show them we will deliver so that they can have our trust,” she added.

Party executive member, Trevor Williams urged the candidates to have “excellent conduct”, accountability to communities and the country in providing community leadership.