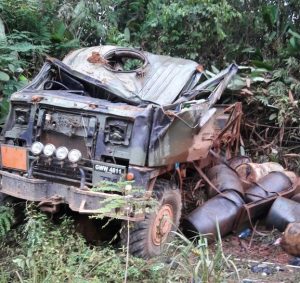 Three men were killed and two others injured were when the fuel-laden truck in which they were travelling turned over twice as it tumbled down a hill in the Puruni River area, police said.

Those, who perished are Clifford Anthony Bhim,24, a porter of Itaballi Landing; David Choo-Wee-Nam,52, a miner of Four Miles, Bartica and  Jude James,39, a miner of Yarrowkabra, Soesdyke/Linden Highway.

Investigators were told that a truck, GWW 4811, transporting about 44 drums of diesels was driving up a hill when it developed mechanical problems and began to descend; in the process , it reportedly turned- turtle twice.

At the time,there were two persons inside of the cabin with the driver and two others in the tray.