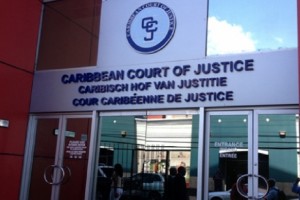 Opposition Leader, Bharrat Jagdeo Saturday night warned the Caribbean Court of Justice (CCJ) that it risked losing its credibility if it does not overturn a decision by Guyana’s courts that President David Granger’s unilateral appointment of a Chairman of the Guyana Elections Commission (GECOM) was constitution although he had been given 18 names.

“This travesty in the ruling that we have seen by the Court will be overturned at the CCJ. If the CCJ doesn’t overturn that, it loses all of its credibility because this is what was placed in the Constitution through joint agreement by all the parties and twenty-five years of practice upheld that interpretation of the Constitution and now Granger unilaterally changes this all and now we have this perverse decision of our courts here in Guyana,” he said.

“This is one of the reasons why I took Guyana into the CCJ so that we can have an external review of decisions made here and today that will test the mettle of the CCJ,” said Jagdeo who was President from 1999 to 2011.

Attorney-at-Law, Anil Nandlall criticised the Guyana Court of Appeal last week for upholding a High Court decision that the President enjoyed the constitutional right to unilaterally appoint a GECOM Chairman if he did not find favour with any of the Opposition Leader’s nominees.

“I am disappointed but not surprised. This yet another case that shows how far more our judiciary has to mature  because it is part of a trend. All the cases that are deeply political are decided in a way and that has to change. Those f you, who were in court, would have heard that all my submissions were upheld…and then suddenly as they are about to make that crucial ruling, there is a collapse- a mental, judicial, jurisprudential collapse in reasoning,” he said. Nandlall said he was happy that Chancellor of the Judiciary, Yonette Cummings-Edwards, and Justices of Appeal Dawn Gregory and Rishi Persaud know what the Constitution says but “it’s unfortunate that they did not give effect to their knowledge”.

Nandlall, on behalf of his client PPP Executive Secretary Zulficar Mustapha, plans to appeal the case at the CCJ.

Jagdeo’s remarks about the CCJ came four months after the Trinidad-headquartered regional court ruled that Guyana’s Constitution was properly amended by Parliament, instead of a referendum, to provide for two-term limits on the presidency. That decision has effectively blocked Jagdeo from contesting the 2020 general elections for a third time, having been elected in 2001 and 2006. When the CCJ handed down that decision in June, Jagdeo had accepted the ruling without any criticism.

The CCJ had earlier this year frowned on then Barbados Prime Minister, Freundel Stewart’s announcement at an election campaign rally that he would have pulled out of the regional court had he won those polls. His announcement had been made against the backdrop of the CCJ ordering the elections management authority in Barbados to register  St. Lucian professor Eddy Ventose and allow him the right to vote in Barbados as a Caricom national.

Attorney General and Minister of Legal Affairs Mr. Basil Williams, who is Head of the Bar, condemned Nandlall’s criticism of the Court of Appeal Judges, saying that it was a “reckless and churlish attack on the judiciary”.

“It is also very clear that Mr Nandlall is becoming unhinged and for a man who has been claiming that other people are losing cases he seems to have suffered a complete meltdown on losing another major case. Perhaps this experience in losing this case regarding the appointment of the GECOM Chairman should enlighten him that in the practice of law before the courts you win some and you lose some.

However, what is very frightening, is the serious deficiency in Mr Nandlall’s psychological framework for him to believe that he will find the courts to rule in his favour despite the plain and literal language of Article 161 (2) that the appointment of the Chairman of GECOM is to be done by the President of the Cooperative Republic of Guyana and not the Opposition Leader,” said Williams.

The Attorney General called on the “usual commentators and the Guyana Bar Association” to also call condemn Nandlall.