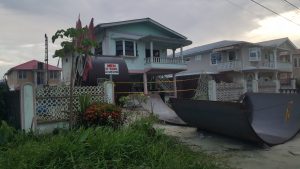 The incomplete gas tank in front of the house that was virtually destroyed and rendered uninhabitable by the sludge, rocks and other material from a natural gas deposit aback the yard.

Residents of a section of Diamond, East Bank Demerara, where a natural gas deposit erupted four months ago, are complaining to government about pollution because the vent is yet to be properly sealed.

Allen told Demerara Waves Online News that the Regional Administration would next week set up a multi-stakeholder group involving the several government ministries to which the correspondence was copied. She said the Civil Defence Commission and the Environmental Protection Agency would also be involved and together they would meet with community representatives. “As the region, we cannot make a decision on our own. We will require a multi-stakeholder approach,” she said.

Executive Director of the Environmental Protection Agency, Dr.  Vincent Adams said he would be heading a team to visit the location on Tuesday to take samples as part of determining the next steps. “We will take samples and determine from our perspective where we go from there. Right now is identifying what the hazard is,” he told Demerara Waves Online News.

After the first eruption on June 14, 2018, it was capped by the Geology and Mines Commission and later erupted on August 14, 2018.  The Commission is said to be currently constructing a huge steel tank to collect the sludge and gas. Authorities are still considering whether to use the gas to power a small electricity generator.

Sources said the Environmental Protection Agency (EPA) is the entity that is responsible for conducting air quality tests. 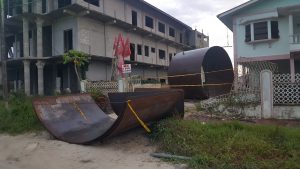 The gas eruption aback a yard was triggered when a man claimed he was digging a water well but he instead struck a gas deposit that spewed mud, rocks, water, gas and other materials more than 50 feet into the air. The violent eruption also destroyed three houses in the neighbourhood.

The residents asked the Regional Chairperson to inform them about any monitoring of the gas levels “and its short and long term effect on us”.  “We have our precious children as young as three months old and pensioners to care for and protect. Therefore, we the residents, are calling on all the relevant authorities to act now,” they said in the letter that was copied to several ministers. They include Minister of State, Joseph Harmon; Minister of Communities, Ronald Bulkan; Minister of Public Health, Volda Lawrence; Minister of Public Infrastructure, David Patterson and the Chairman of the Neighborhood Democratic Council, Barrat Narine.

The residents also told the Regional Chairman and government ministers that no one has told them anything about compensation for damage to their houses and depreciation of the land and property should they have to remove permanently.  “During the first eruption, the impact of the explosion shook the houses in the immediate neighbourhood, resulting in severe structural damage for example cracked walls, cracked fences , damaged foundation and broken pipelines. Based on our knowledge the relevant authorities did not attempt to assess he structural damage residents incurred as a result of the explosions,” they said.

In terms of information, the affected residents said they were being left in the dark about what was happening. They recommended that one agency provides them information instead of several speaking to the media. “We are not privy to any information arising from this disaster. Our fears, anxiety and concerns are genuine and warrant government’s intervention to alleviate our anxiety and concerns,” they said.