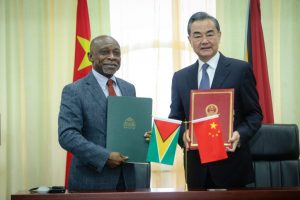 Minister Greenidge and Minister Wang following the signing of agreements.

China on Saturday signed a US$37.6 million agreement to boost Guyana’s broadband access for security surveillance and the provision of remote health care, officials said.

“This project will see the upgrading of the network to enable an equitable delivery of service in the education, health, security, business and other sectors,” said Guyana’s Foreign Minister shortly after signing the agreement for the Guyana National Broadband Project with China’s Minister of Foreign Affairs Mr. Wang Yi.

The accord was signed in Georgetown, the capital of this oil-rich South American nation.

“I am certainly aware that in intelligence-led policing, you can use the camera systems to determine what courses of action they can take in order to prevent crime and maybe, if it’s allowable in court, they can use that as evidence in court,” he said.

The Guyana government says it hopes to reduce the need for long queues for basic services such as applying for birth certificates, passports and other public services.

The Foreign Minister of Guyana also announced that Guyana was preparing to take advantage of opportunities under China’s Belt and Road Initiative (BRI) following the signing of a memorandum of understanding (MOU) in July, 2018.
.
Greenidge and said he and the Chinese Foreign Minister discussed how “to extract practical benefits for our countries and peoples” through the BRI. “The two countries must now identify specific proposals and develop a mechanism by which projects and programmes in these areas, may be proposed and evaluated at the technical level,” he said.
That accord provides for broad areas of collaboration in policy coordination, strengthening connectivity, promoting trade and increased people-to-people exchanges among others.
Guyana and China established diplomatic relations in 1972.