PPP promises no new taxes to Georgetown; govt yet to decide on paid parking, but increased property rates likely 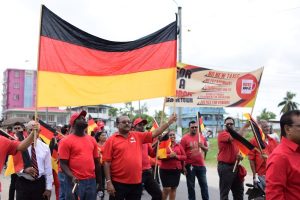 A section of the People’s Progressive Party’s contingent that accompanied party representatives to submit its nominees for Georgetown municipal elections.

As the Guyana government prepares to lay the groundwork for increasing property rates and taxes in towns and villages, the People’s Progressive Party (PPP) is opposed to additional taxes on the citizens of Georgetown.

“We know more revenues can come in there other than putting additional burdens. Don’t forget when this government came in has put over 200 new taxes in our citizens so we are not in a hurry to burden this country anymore so we have to look very carefully at what they are proposing before we can agree to any increases,” outgoing People’s Progressive Party (PPP) Councillor, Bisham Kuppen told Demerara Waves Online News. He was part of the PPP’s delegation that submitted its list of candidates for the Georgetown City Council on Nomination Day, ahead of Local Government Elections scheduled for November 12.

Local Government Minister, Ronald Bulkan said government has hired the Municipal Property Assessment Corporation of Ontario at a cost of GY$330 million to provide technical support to the government’s Valuation Office to have an inventory and valuation of properties countrywide. “Let’s hope that it will be completed some time towards the end of next year. That information will be provided to all of the local government organs and what they will have at their disposal is accurate real-time data that would assist them in making informed decisions. The Central Government is not going to dictate to any organ what level of taxation should be applied. That determination will be made individually by each of our councils,” Bulkan said.

Kuppen did not give a clear-cut position on whether his party will support the introduction of paid parking – not necessarily the controversial suspended contract with Smart City Solutions- but said he favoured proper traffic management in the capital. “We would support an intelligent system to control traffic,” he said. “We do need to control traffic in Georgetown. The parking meter- the contract that they had there- is not the answer because it was done in a corrupt manner,” he added.

A  Cabinet sub-committee has for several months now been reviewing the parking meter contract between City Hall and Smart City Solutions, but Local Government Minister Bulkan could not say how long that process would take. He denied that central government would approve the parking meter bylaws after the LGE because APNU did not want to lose support. “No, I have always been record, at a personal level, as saying that I recognise that there is considerable merit towards paid parking in Georgetown. It will help to restore order to the chaotic conditions in our city streets and it will also help to bring about revenues towards the council,” he said. Among Central Government’s concerns, he said, were the steep metered parking rates.

Saying that the PPP selected knowledgeable and experienced candidates during “intense house-to-house consultations in the communities,” Kuppen promised that his party would “overhaul city hall” through accountability and transparency. “You have to realise that billions are being spent with no clear accounting,”  he said, adding that the Council’s audits have been stymied by absent or incomplete records. He accused the Town Clerk, Royston King of using the “emergency” provision to award several contracts for the cleaning of the Le Repentir Cemetery.

Kuppen lamented the relocation of vendors from the dilapidated Stabroek Market wharf to the East Bank Demerara bus and car park although it was well-known that the wharf was deteriorating for years.

The PPP is fielding candidates in all of Georgetown’s constituencies and proportional representation seats. That party said it would roll out its local government manifesto in the coming days.