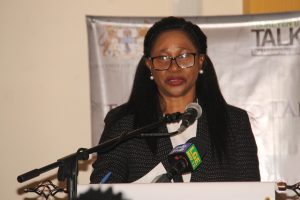 Chancellor of the Judiciary, Yonette Cummings-Edwards addressing the University of Guyana-arranged Turkeyen-Tain Talks on the topic “A Better Life for Youth: Juvenile Justice in Guyana”.

Chancellor of the Judiciary, Yonette Cummings-Edwards said two magistrates have been already trained in Jamaica, Trinidad and Tobago, and United States (US) to preside over the daily court sessions in Georgetown.  Other magistrates, she said, would be trained and one day each month set aside for the trial of juveniles in other magisterial districts. The Chief Magistrate, Chief Justice and magistrates have also participated in study-tours of other juvenile institutions overseas. “We are able to compare, contrast and to take away from their the best practices rather than invent the wheel so we are proactive rather than reactive,” the Chancellor said at a University of Guyana-arranged Turkeyen-Tain Talks on the topic “A Better Life for Youth: Juvenile Justice in Guyana”.

Cummings-Edwards said the courtroom in Georgetown has been made child-friendly with bright colours.

The commencement order to activate the Juvenile Justice Act has been drafted and sent to the Attorney General’s Chambers for publication in the Official Gazette. 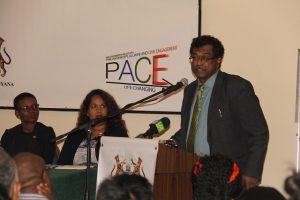 Public Security Minister, Khemraj Ramjattan said the order for the act, which was approved by the National Assembly on April 26, 2018 and assented in June, was delayed due to the fact that government needed to first find out what was the cost of certain facilities. “We decided that before bringing the act into operation that there must be a costing done as to what will it cost to make it operational,” he said.  The law provides for the appointment of a Director of Juvenile Justice, establishment of  a juvenile justice committee, establishment of temporary facilities, training of magistrates which was projected to take about four months.

The United Nations Children’s Fund has estimated that Guyana would have to find GY$590 million to GY$600 million to run a child-friendly criminal justice system in accordance with the Juvenile Justice Act. “We are not yet gaining from the oil and gas sector revenue stream… and I am absolutely certain that we’re going to get there one day where we can have the maximal amounts that we wanted but I rather suspect that this year’s budgetary allocation for that can’t meet that very high amount so we are going to have far less than that but whatever it is, it;s going to be a good start,” he said.

Ramjattan said temporary facilities would be set up to house juveniles instead of the sometimes “extraordinarily appalling” police lockups. “It is also important that we in this country make sure that our children, although they might have committed wrong, do not become graduates like when they are sent to prison or the police lockups. What we have found is that they learn lots more wickedness and mischief there; they graduate and we have to avoid that,” he said. 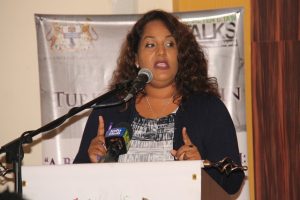 Neuro-psychologist and Lecturer in Clinical Psychology at the University of the West Indies’ Faculty of Medical Sciences, Dr. Katija Khan

Neuro-psychologist and Lecturer in Clinical Psychology at the University of the West Indies’ Faculty of Medical Sciences, Dr. Katija Khan stressed the importance of collecting and processing data about juvenile offenders to assist decision-makers to identify and treat those with the highest risk.  Khan appealed to Guyanese authorities to spend monies on training professionals such as guidance counselors, clinical and school psychologists. “I also want to make an appeal on behalf of the professions that to the government, to the budget holders, to the influencers in the room that we need the resources to train and to build capacity in Guyana… so if you are really serious about juvenile justice and the future of our youth you have to back that up with some hard resources and commitment,” said Khan.

Clinical Social Worker, Nicole Cole of the Rights of the Child Commission and the Women and Gender Equality Commission, complained at the forum that although the legislation had been approved, she said during a visit of the Juvenile Holding Facility on June 1, 2018, “there were still children in there being charged with wandering”. In that regard, Ramjattan said he had instructed the police not to charge children with wandering.

Cole said statistics show that 481 cases- 393 girls and 88 boys- of abuse reported by the Child Care and Protection Agency for the first six months of 2018; 238 reported cases of child sexual abuse.

Figures provided by the Chancellor of the Judiciary show that cases involving children, including those for the now outlawed offences of wandering, vagrancy and truancy, number 30 cases in Georgetown; 20 on the Corentyne; East Berbice 29, West Berbice four, West Demerara 16, East Demerara six, Essequibo Coast and Islands 18, Upper Demerara nine, Rupununi 11, all from January to June, 2018.

The legislative reform dates back to 2004 when Guyana was told that its current laws were not in conformity with the United Nations Convention on the Rights of the Child.