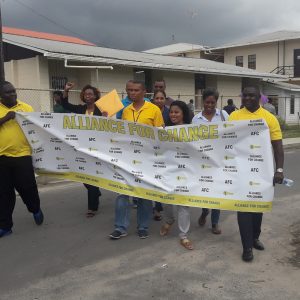 The Alliance For Change (AFC), which broke away from A Partnership for National Unity (APNU) to contest the Local Government Elections on its own, on Friday turned up turned up with eight persons to submit nominations to contest for the Georgetown City Council.

However, AFC Executive member Michael Leonard downplayed the few persons who rallied under his party’s banner as they entered the Guyana Elections Commission’s Returning Office at Critchlow Labour College, Woolford Avenue. “We don’t believe in theatrics. We have our persons at the office and we have strategically deployed persons across the regions because we are contesting not only in Georgetown but in all of the municipalities and many of the NDCs (Neighbourhood Democratic Council) as possible so we have persons going around to offer strategic support,” he said.

Leonard said his party would be contesting in all of the City’s constituencies in the first-pass-the post and proportional representation.

Asked what the AFC would bring to the table should it win any seats in the City’s Council, Leonard said it would be “speaking on behalf of the citizens, ensuring that we push for accountability and transparency” The AFC has vigorously spoken out against the now suspended parking meter contract between the City’s administration and Smart City Solutions.

Meanwhile, former Deputy Mayor Sherod Duncan said he was not a candidate this time around but he was supporting the entire slate which includes “new persons with fresh ideas”. “I want new persons to come into the system. I think I have done enough. I think life is about stages so I’m happy to go on to do other things for my party while other people come into the system at the local government level.”

The AFC decided to run separately after it could not reach agreement with APNU on several key issues such as a 60-40 percent allocation of seats, mobilisation, campaigning and financing.

APNU Chairman, President David Granger recently highlighted the need for candidates to go out and campaign in their constituencies.