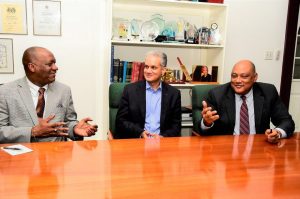 FLASH BACK: Minister of State, Minister Joseph Harmon, then Adviser on Petroleum, Dr. Jan Mangal and Minister of Natural Resources, Mr. Raphael Trotman during their discussions at State House

The Ministry of Natural Resources on Friday said there was no “sinister motive or corruption” in decisions for the ExxonMobil’s Development Plan for Liza Phase 1 and the state’s regulatory Guyana Geology Mines Commission (GGMC) and contracted advisors were involved in the process.

“Though it may be difficult for some to see presently, the nation will, in the near future, realise, and come to know, that no funds were misappropriated and that no illegality or nefarious objective guided our decision-making at the Ministry of Natural Resources,” the ministry said in a statement in reaction to an article in the privately-owned Stabroek News in which Dr. Jan Mangal, former Petroleum Advisor to President David Granger, called for a “real and substantive” review of the cost of the Liza Phase 1 project before all approvals for Phase 2 are granted.

Mangal has preferred to see the Natural Resources Ministry review the US$4.4 billion cost before the production licence was approved in mid-2017. He estimated that if the Liza Phase 1 project could have be cut by 20 percent, that meant that the Natural Resources Ministry had effectively given ExxonMobil U$880 million “for no reason”. “Even if the percentage is 10% and not 20%, why would the MNR do such a thing to the people of Guyana?” queried Mangal.

ExxonMobil plans to begin commercial pumping of oil from Liza Phase 1 in early 2020.

The Ministry added that the Cabinet- the Executive that is made up of the President and most of his ministers- was kept abreast and involved in each decision. “At every step of the way the Ministry of Natural Resources relied on guidance and advice from the Guyana Geology and Mines Commission (GGMC), and the external contractors retained by that entity, to guide on each such step. Additionally, the Ministry sought and obtained Cabinet’s unanimous approval for each decision made,” the ministry said. 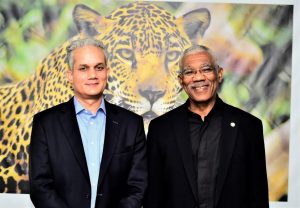 FLASH BACK: President David Granger and then Advisor on Petroleum, Dr. Jan Mangal

Having been given “strict responsibility for the first oil production by 2020, the Natural Resources Ministry said other ministries were given specific mandates to ensure that the timeline was kept. “The Officers at the Ministry did their best within their capabilities, capacities and available resources.”.

The Ministry of Natural Resources wished “God’s speed and guidance in the process going forward” to the Ministry of the Presidency’s Department of Energy which took over responsibility for the oil and gas sector.  Resource Economist, Dr. Mark Bynoe has since been appointed to head that department which is being staffed with experts and administrators.

The Guyana Revenue Authority (GRA) plans to audit only the pre-contract US$460 million up to December 2015, although the cost recovery charges are believed to be more than US$500 million.

ExxonMobil estimates that the development of the Liza 1 well could cost at least US$4.4 billion that would have to be recovered by as much as 75 percent in keeping with the 1999 Production Sharing Agreement. The remaining 25 percent will be split equally between the company and Guyana as profit oil.

Pointing to countries that have well managed oil and gas resources against those who don’t, he said that the key factors are reviewing and verification of all transactions.

He added, “One might ask why we need to review these costs. Why not trust the foreign oil companies to give us our share and not to inflate their costs (so as to increase their profits at our expense)? Look at the countries that get exploited by foreign oil companies and their own corrupt politicians. Those countries tend not to verify and check, often because their politicians are on the take, so they do not care about the people. Then look at the countries where the people benefit and the environment is not degraded by oil: these countries tend to review and verify everything.”

Mangal, who worked for major oil companies, has argued that the Guyana Revenue Authority (GRA) does not have the capacity and should not seek to acquire such capacity to review, challenge and negotiate proposed pre-Final Investment Decision cost for seismic surveys, exploration wells and other activities up to mid-2017; proposed capital costs of US$4.4 billion for building the Floating Production Storage and Offloading (FPSO) vessel,  production wells, the subsea pipelines, the shorebase, etc from mid-2017 to first oil in late 2019 or early 2020, and annual operating costs of about US$200 million for Liza Phase 1 for the next 20 years. Those tasks, he said, should be left to Oil and Gas professionals who could conduct an audit based on specialist interpretations. “The GRA does not have the capacity to review nor even the capacity to oversee the review of contract costs. Furthermore, the GRA should never try to develop the capacity to play such a high-level role. The role of a tax authority is tax, and tax is only a small part of the contract costs. Do not get me wrong, the GRA has a very important role to play, but a role focused on tax issues,” Dr Mangal said.

2018-09-14
Denis Chabrol
Previous: APNU mum on local govt campaign cost; says communities will select candidates
Next: Town Clerk Royston King to be sent on leave ahead of Commission of Inquiry