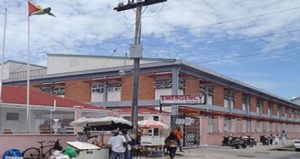 The state-owned Georgetown Public Hospital Corporation (GPHC) on Monday decided to launch an investigation after a 35-year old woman alleged that medical personnel at that institution were negligent, resulting in the loss of her unborn child.

Chief Executive Officer of the GPHC, Retired Brigadier George Lewis told Demerara Waves Online News that the board, management and staff of the hospital sympathise with Olive Correia-Jacobs who resides at Bartica.

Lewis, who said he first learnt of the stillbirth on Social Media, explained that the probe would include an examination of Jacobs’ medical records, interviews with the medical personnel named in her complaint as well as other workers, and the woman.

“After seeing the report on Social Media, I would have forwarded it to the relevant persons to provide their account of the situation. Basically, an investigation has been launched into the matter and we await the findings of the investigation,” the CEO told Demerara Waves Online News. He said Correia-Jacobs’ account has been circulated to the persons named in the woman’s account and they and others have since been asked to submit statements.

Figures show that the GPHC delivered more than 7,000 babies in 2017, and almost 3,000 babies from January to June, 2018. There have been also several stillbirths.

Correia-Jacobs said she was transferred from Bartica to Georgetown on 5th July, 2018, after she had been repeatedly assured  that she would have been able to deliver her baby at Bartica. However, when it was close to her delivery she said she was told that she would have been transferred to GPHC because the theatre was not working and it was her first baby.

Correia-Jacobs said the Essequibo River was “very rough” while she was being transferred by speedboat. The 39-week pregnant woman at the time said based on checks done, she was told that her baby was fine. “I was attached to a little machine where my baby was monitored and was found to be excellent,” she said, adding that while she had been walking around for more than one hour, “my tummy was very, very, very hard and uncomfortable.”

She said medical personnel had failed to check her blood, and that she had been suffering from severe pain and had fever. Eventually, she said, her water bag was clipped and moments later she was informed that her baby died inside her body.

The woman said no autopsy was conducted and she was given two causes of death- heart attack and sudden death syndrome. She said nothing was recorded in the unborn child’s clinic card from her arrival to discharge from the GPHC.  Correia-Jacobs lamented the treatment that she endured while at the GPHC including being made to walk instead of being placed in a wheelchair and being left unattended in an extremely wet and messy bed and clothing.

“What I have just been through shows the lack of professionalism and compassion in the public health system in Guyana. Everyday these people are entrusted with our lives and those of our unborn children. But are they fully trained or qualify to be in such position?,” she added.

The GPHC’s CEO appealed to the public to report incidents of that type urgently instead of waiting for weeks to past.