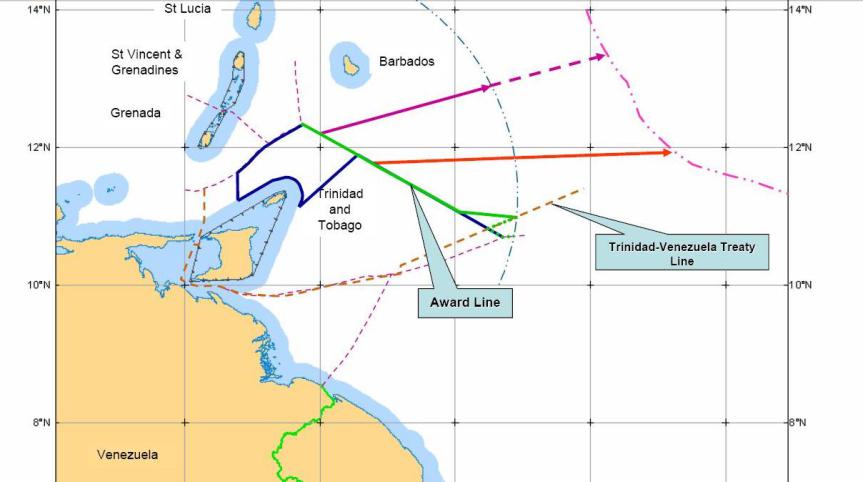 Back in 1990, Trinidad and Venezuela had signed a delimitation of marine and submarine areas which some experts have said have implications for Guyana’s maritime space.

“There have been no technical or political discussions between Guyana and Trinidad and Tobago or Guyana and Barbados on the maritime boundaries in the longest while. The Prime Minister of Barbados did say to us that they would be interested in looking at this matter,” Greenidge said when asked by Demerara Waves Online News at a news conference. He added that President David Granger said the technical experts of both countries could discuss that matter.

Greenidge said a draft memorandum of understanding on energy with Trinidad and Tobago might provide a window of cooperation on maritime space.

He noted that the maritime boundaries among Guyana, Trinidad and Tobago, and Barbados overlap with those of Venezuela. “Therefore, it becomes difficult for us to simply negotiate a boundary with one partner when the boundaries overlap with two or three. We can’t bind the third partner if the two of you meet,” he said.

He said those discussions would have to include Trinidad and Tobago and would be held after the International Court of Justice (ICJ) delivers its judgement on the Guyana-Venezuela  border controversy.

Back in 1990, Trinidad and Venezuela had signed a delimitation of marine and submarine areas which some experts have said have implications for Guyana’s maritime space. “We have had problems already due to at least one of our Caricom (Caribbean Community) carrying out negotiations with Venezuela purporting to bind us in an arrangement in which we are apparently, by that process, defaulting or conceding part of the territory that would normally be Guyanese territory so we are wary about carrying out those discussions in the absence of a mechanism for resolving the boundary with a third country which may share that sea space,” he said in apparent reference to the Venezuela-Trinidad agreement.

However, the Guyanese Foreign Minister suggested very strongly that Guyana would not respect that agreement. “Those can’t stand if they affect Guyana’s space. You can’t gang up and decide to agree on my boundary,” he told Demerara Waves Online News.

Greenidge said if the talks between or among Guyana, Trinidad and Tobago, and Barbados reach stumbling blocks, the United Nations Convention on the Law of the Sea (UNCLOS) mechanism could be invoked.

“They can do them bilaterally and then trilaterally and, if necessary, they can do it within  the aegis of the UNCLOS. In other words, the two countries can do it and then bring in a third and if they are having a difficulty for any reason- uncooperativeness or disagreement over the understanding and the rules- they then invite or ask UNCLOS to help them,” he said.

Guyana, which ratified UNCLOS in 1993, in 2004 invoked that mechanism and took Suriname to the United Nations Tribunal of the Law of the Sea which settled the maritime boundary dispute in 2007. Barbados, and Trinidad and Tobago have already ratified the UNCLOS, but Venezuela is not a party to that agreement.

Guyana and Barbados in 2003 signed an agreement to jointly cooperate in an area where their maritime exclusive economic zones overlap.