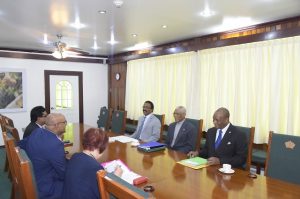 Carter last week called Jagdeo to enquire why the People’s Progressive Party (PPP) was, by President David Granger’s account, unwilling to meet with a government delegation to be led by Prime Minister Moses Nagamootoo.

Jagdeo said he informed Carter that he did not think that the Prime Minister had sufficient political clout to make binding decisions on behalf of the government.

“I pointed out to President Carter it was not Nagamootoo that was the issue. It was our concern that we expressed that Nagamootoo does not have any portfolio. He is a lightweight in the government and he would not be able to commit  APNU (A Partnership for National Unity) or the PNC (People’s National Congress Reform) at the meeting,” Jagdeo said. The former Guyanese  leader highlighted that if the Alliance For Change (AFC) was unable to hold talks with APNU, then it couldn’t make major decisions on behalf of the government.

In that regard, the Opposition Leader said that on Thursday  the President said if Nagamootoo was the stumbling block, he would instead lead the talks. The President reportedly said he would like to speak about crime, the environment, and oil and gas, but Jagdeo said he first has to consult his party before getting back to the Guyanese leader.

“We would decide whether we would engage in this and whether we want to add issues to the agenda because somehow I think the international community was under the impression, including President Carter and the others, that they had offered to talk about governance and constitutional reform and we had rejected it but from the topics that the President, himself, proposed you would see that that was never the attention,”  Jagdeo said.

Disclosure of the former American leader’s discussions with Jagdeo and Granger came less than one month after the  US Ambassador to Guyana, Perry Holloway credited the opposition with investing in crime fighting and maintaining macroeconomic stability. “Both the previous government and the current government have spent a lot of money on security,” he told a recent event organised by the Guyana Manufacturing and Services Association.

The following day, the top American diplomat here also praised the former administration for fighting poverty. “This government and the past government have made great strides in pulling people out of poverty,” Holloway has said. In the area of economic management, “you have a macro-economy that has been doing well for the past five years and is projected to do well for the next few years…Both the previous government and the current government must be given credit for being sound stewards of the larger macro-economy. This is not to say that there aren’t sectors that are suffering; there are,” he has said.

The Carter Center’s involvement dates back to 1990 when it brokered key electoral reforms such as fresh house-to-house registration, a seven-member Guyana Elections Commission and the counting of votes at the place of poll.