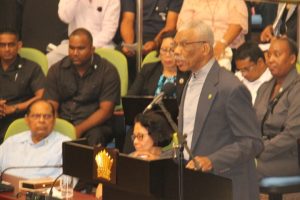 “I don’t know any promise has been broken. They asked for a plot of land, I went there, turned the sod myself and it’s being processed. I didn’t break any promises,” Granger said as he entered his car and his aides asked the media to give way.

Speaking with the media afterwards, the President said he did not break any of his promises made to the Amerindian community over the last three years.

Granger highlighted that two years ago, he proposed the establishment of an Indigenous People’s Authority to craft and implement plans. “The important thing is planning and implementation. I’m not blaming a soul,” he said. 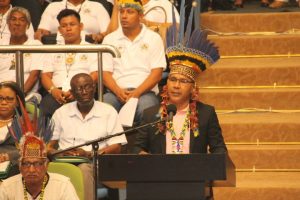 His suggestion of an authority, an inter-sectoral mechanism- had been rejected by the opposition People’s Progressive Party and a number Toshaos as an unnecessary layer of bureaucracy that was aimed at centralising political control and sidelining the NTC.

In his formal address, the President said the NTC is not a political organisation but is part of the executive that has to work with the regional and local development organs to deliver public services.

Prime Minister Nagamootoo said he was unaware of broken promises, but when told that they included amendments to the Amerindian Act, constitutional reform, land titling, among others, he said “those are areas that are a work in progress”. Singling out constitutional reform, he said that matter was before a parliamentary  select committee.

“I don’t see this as a question of making or breaking promises. I see this as a process, I see this as working in collaboration with various agencies and levels of governance to be able to produce a better life for our people,” he said.

On the subject of land titling, the Prime Minister said some titles would handed out and that work was continuing apace and there were various levels consultations. Land titling, he said, was linked to land resources so that title holders would know the available resources. “One has to take things into a context so it’s not an attempt to deprive the Indigenous Peoples of communal lands but it is part and parcel of our effort to do a land inventory,” he said.